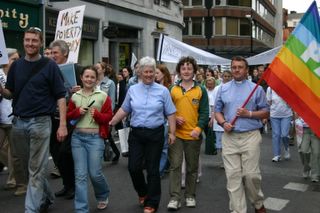 Last Thursday evening at 7 pm, there were 20,000 of us on the streets of Dublin on the ‘Make Poverty History’ march – a tremendous crowd on a weekday evening in a country of just four million people. This would be equivalent to a quarter of a million people appearing from nowhere to march in London on a weeknight.

The march was an inspiration. 75% of those taking part were teens and twenties. In a society that is supposed to be marked by indifference to neighbours and avarice, greed and envy, here were at least 15,000 younger people looking for a different world.

There was something I noticed though, the next age group of people were those in their fifties or sixties, the veterans of the radicalism of the 1960s. Where were the missing generation? Where were my generation?

The people missing from the march were the generation that had grown up through the years when neo-liberalism cast a giant shadow; when free market economics, where the market place determined everything, espoused by people like Margaret Thatcher, were god, and where all that mattered was acquiring as much as possible.

The missing generation were those who had lived through the years of massive unemployment and huge gulfs in wealth. The various tribunals here in Ireland are now revealing that while the health and social services were lacking the most basic facilities, individuals were illegally salting away billions and billions of pounds.

My generation are concerned with themselves, perhaps the experience of the 70s and 80s was so bruising that altruism doesn’t come easily. My generation are the ones who might have believed Margaret Thatcher when she said that there was no such thing as society.

Thursday showed that there is a new generation rising and that a different world is possible.