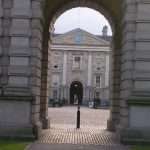 A curate’s stipend in 1986 was not very much, but it was enough to get by, if one was careful. Some months were more difficult, a coincidence of two or three bills and the money was stretched. The beginning of September that year was particularly tight, by the time the utilities and other bills had been paid, there was not much left to get through the month.

Sitting at our weekly Tuesday morning parish staff meeting, the saintly, long-suffering Rector under whom I served, inquired as to where I would be taking my wife for our wedding anniversary, which fell the next day. ‘To be honest’, I said,’we’re not going anywhere – the money is a bit tight this month; we’ll go some other time’. He passed no comment.

While making lunch in the kitchen of the curate’s house later that day, there was a rattling sound from the letter box. Walking up the hall, there was a glimpse of the Rector stepping into his car and driving off. There was a brown envelope on the floor with ‘Ian’ written on it in his unmistakable hand. I had only left his house half an hour previously, something must have been forgotten, but why couldn’t he just have phoned?

Opening the envelope, it contained £15, a sum equivalent to one-sixth of my weekly pay, enough to go out for an evening. It was a gesture that has remained a vivid memory – unnecessary and unmerited kindness.

Going to an ATM at lunchtime today outside the AIB branch in Grafton Street, the screen declared it temporarily out of service. Stepping inside, there were three ATMs and a handful of people waiting. At the middle of the machines, a young woman who seemed probably a student from nearby Trinity College had tapped the keys to inquire as to her bank balance – €77.31 declared the screen in digits so large that it was easy to read from a distance. The young woman paused before proceeding to tap further keys to withdraw cash, obviously pondering how much she might afford.

The memory of my Rector suddenly returned. I stepped forward to withdraw cash. I could hand her €20 of it and would not even notice, but the machine seemed to take an inordinate time to issue the notes and by the time I stepped outside she had disappeared into the crowds on Grafton Street.

The recession has frightened us into spending less and saving more. As prices have fallen, it has left those with secure incomes and paid mortgages with more money in their pockets. As prices have fallen, it has led to fewer jobs and fewer opportunities for people to earn money. While I have more, the young woman at the next cashtill has less. Handing her cash would not even have been an act of kindness, it would simply have been a matter of justice; and it would have made one small corner of the world seem a happier place. 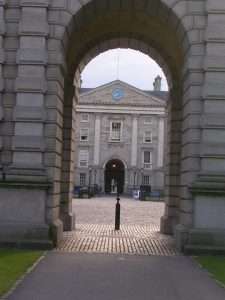