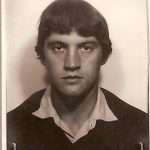 It is thirty-one years today since Katharine’s father died – a Sunday in December 1981.

It was too late in the day to begin to travel to Scotland for a ferry to Larne.  The alternative was an overnight journey, via Dublin. The man in the ticket office looked at me with suspicion.  A ticket to Ireland from Taunton had to be hand written.  He took out the fares book to find the fare to Dun Laoghaire. ‘How do you say that?'”

I tried to explain. ‘That’s not how it’s spelt’, he grumbled.  The ticket was misspelt, maybe deliberately.  Ireland was not popular in 1981.

The short December day gave little light to the passing landscape; it was dark by four.  There was a change at Crewe for the night train to Holyhead.  There were few people on the 3.15 Sealink ferry on the Tuesday morning.

The ship docked at 6.45.  The morning papers were carrying reports from Poland where the Communist authorities had crushed the Solidarity movement.  It would be another eight years before freedom would be won.

There is a railway station within 300 yards of the Carlisle Pier where the Sealink terminal was situated, but for some reason the journey to the city centre on that winter morning was by bus.  The conductor was good humoured and gave plentiful advice to people about how to reach their destinations.  At Ballsbridge he pulled the cord himself to allow a disorientated visitor to get off.

At Connolly Station, a place I had last travelled through some three months previously and had not expected to see again, the Belfast train was pulled by a dirty orange and black locomotive. In those pre-plastic days, there must have been some point where Sterling £5 notes were handed over at a bureau de change in return for Irish Punts. In 1981, the coins were still interchangeable, unless someone examined them, but the banknotes had diverged in value and were regarded as foreign currency.

The sparsely filled train rattled northwards, every mile of its journey was, to me, undiscovered country. I had been to Ireland only once before, and had travelled no further north than Dublin’s Botanical Gardens.

Drawing closer to the border, there seemed little to announce the crossing of an international frontier; a customs official stood looking bored at Dundalk station. Northern Ireland was announced by a the members of an army foot patrol being dotted across a snow-covered hillside in South Armagh, their camouflaged combat uniform making them stand out against the whiteness around.  We were now in the land of infamous place names, each town and village conjuring up memories of news stories of violence.

The train stopped only at Portadown before heading north-east to Belfast. Stepping onto the platform, there were signs that declared the station to be ‘Craigavon West’; markers of a vision of the Unionist government to create a new city, incorporating Portadown and Lurgan, named after a former Unionist prime minister.  Even Unionist people seemed to have little enthusiasm for the experiment.

A diesel multiple unit eventually arrived, perhaps it would have been too much to have expected it to be co-ordinated with the arrival of the express, and gently took its handful of passengers through the Ulster countryside.  At Lisburn, I walked out of the station and into a new world.