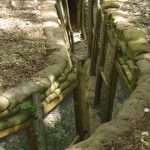 Will people of the 21st Century leave any tangible record of their individual existence? The Internet, email, texts, constant phone chatter, communication is instant, easily accessible and affordable in a way unknown ever before, but what does it leave behind, what artefacts might remain?

Among postcards in the house are those exchanged between Katharine’s great uncle and aunt. Correspondence from the years of the Great War, beginning in 1914 and ending in 1918;  a very ordinary story of ordinary humanity lived against the background of an unfolding hell.

Thanks very much for birthday card. You’ve a good memory. Wish I had it. Hope you got letter before leaving. Best of good wishes from (Pte) Tom Mahood.

I think the train reaches Ballyroney at 5.30 Saturday so that I’ll be with you soon after 6. I’ll wire you if I don’t get a permit but not otherwise. Looking forward to seeing you fit and well. Love T.M.

Cakes arrived yesterday morning and are now no more. They were fine, thanks very much. Weather here keeps good and I hope you are in good form after your holidays Love and best wishes from Pte Mahood (written with a little stump of pencil).

Tom’s battalion, the 10th Battalion, Royal Irish Rifles (South Belfast Volunteers) were part of the disastrous assault that marked the first day of the Battle of the Somme on 1st July 1916.

On 3rd July 1916, Tom was allowed to send a Field Service Post Card, one where soldiers simply deleted as applicable and were allowed to simply sign and date the card.

The battle was such that Tom was allowed to send a second similar card on 6th July 1916, just three days later.

In July 1917 Tom sends a Field service Post Card (presumably from the Messines area after the Irish Divisions had fought alongside each other in the battle there the previous month). In the intervening twelve months he must have returned to Ireland on leave, for when he writes from the Front it is no longer to Miss Nora Morrison.

On 7th September 1917, Tom was in England. He sends Nora a picture postcard of the interior of Wells Cathedral in Somerset with the greeting, ‘Very pretty isn’t it? Am keeping as fit as a fiddle. Love Tom’

Tom’s battalion was disbanded in February 1918, the postcards do not record to which unit Tom was attached, but in the spring of 1918 he is back at the Front, writing Field Service Post Cards to ‘Mrs T Mahood, 126 Henaham Vale, Queen’s Park, Manchester, England’ on 24th March, 30th March and 7th April 1918.

What will be left behind from the current time for people to discover in 2108?