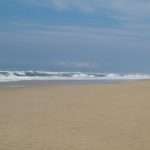 BBC Four is a treasure trove, gems of programmes tucked away in unlikely recesses like 8.30 on a Monday evening. The second episode of  ‘Britain on Film’,  a series of ten films made by the Rank Organization in the 1950s and 1960s, ‘Brits at Play‘explored the growth of the holiday industry in the 1960s. From hop pickers travelling from London to Kent for six weeks to coach tours through Italy, the massive growth in the number of holiday makers reflected the growing affluence of people. It must have been very affluent people who could afford to ski or have their flown to the Continent; Blackpool beach or one of the holiday camps were more accessible to most of the population.

Memories of my very first summer holiday in August 1968 are still fresh. An uncle and aunt took me with them to Cornwall on a camping holiday. My aunt is only twelve years older than me, so was nineteen at the time, but she was my aunt and was always grown up.

We left Yeovil in Somerset on an August Saturday morning in my uncle’s little blue Simca to travel to Perranporth on the north coast of Cornwall. The journey was maybe a hundred and twenty miles, but there was no motorway and the entire population of the country seemed to be heading westwards.

All went well until we were crossing Bodmin Moor in a constant line of traffic. The heavily laden car broke down. My uncle was always very organized and an AA patrolman on a bright yellow motorcycle came along and fixed it, though the delay seemed almost unendurable for a small boy.

We reached the campsite by teatime, to join another uncle and aunt and five of my cousins. Unpacking the car brought laughter: the Simca was rear engined and my other uncle, mug of tea in hand, walked over to look into the boot at the front of the car, where all the bags were stowed, ‘Pat’, he called,’it’s no wonder you broke down. The car has no bloody engine in it!’

The sun shone brilliantly the next day and we descended the cliffs to the huge sandy beach with the Atlantic waves bringing brilliant white surf. Rowntree’s Fruit Gums from a yellow box were passed around. Monday came damp and misty and there was no chance of the beach; we went to Penzance and sat in the car and ate Cornish pasties looking out at the rain. By Tuesday, the sunshine had returned, the sky was vivid blue and the whole day was spent doing whatever a seven year old did for a day on the beach.

My next memory was Wednesday morning, the wind had blown down our tent and heavy rain was falling. I had continued sleeping, even with no tent over me. We packed and headed for home.

Images from four days forty-five years ago remain as vivid as the colours of the Rank films. Perhaps that was the power of holidays for those who were featured, the capacity to generate memories that would not only last the winter, but would endure a lifetime. 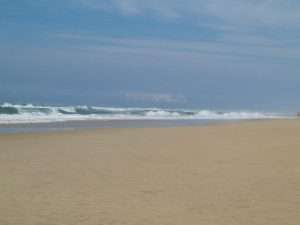