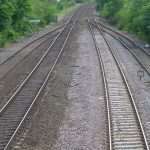 C.S. Lewis’ vision of hell is a grey English midland industrial town where one is perpetually in streets at the periphery where the dusty-windowed shops are always closed, where it is constantly grey, where there is no beauty, no diversion, nothing that could remotely be described as attractive. It is a vision articulated in his 1943 book “The Great Divorce”, a fable of the division between heaven and hell.

Were Lewis to be writing his novel some seven decades later, he might have found inspiration south of the Mersey. Sitting at Liverpool Lime Street station, there seemed not much point in waiting around for a train not set to depart for another hour. The thought occurred that, instead of taking the 2033 train, taking the train at 1933 would mean arriving at the point where a change of trains was necessary an hour earlier and might mean the chance to walk around a town never previously visited.

Stepping off the train at Bidston, sixty minutes earlier than scheduled, the mistake became immediately apparent; the station was not anywhere, least of all in a town that might be explored. Walking up the stairs from the platform to the bridge over the line, the vista offered a park-and-ride car park and, beyond it, a 24 hour out of town shopping centre.

The shopping centre seemed to offer the only way of passing the time, perhaps there might be some place for a cup if tea. A clergyman with a suitcase made an odd sight walking from a busy main road into the centre. Following a sign for “cafe” proved fruitless. A staff member gave an odd look and explained that the cafe closed at six o’clock in a tone that implied that only and odd person would be looking for a cafe in Tesco at quarter past eight on a Tuesday evening.

There was nothing for it than to walk back to the station; its qualities for consideration as a suitable venue for the thoughts of C.S. Lewis were manifest. A portacabin served as a temporary ticket office and, beside it, a portaloo served as toilets. The station was once blessed with fine old wooden buildings on the platform. Buildings that would have overseen the coming and going of generations but were now very firmly closed up. A notice advised that repair works were being undertaken and builders’ materials  stacked behind steel barricades suggested work might be in hand, but nothing specified what the work might me. Trains came and went from either side of the platform, heading to stations with unfamiliar names; there was a sense of disorientation, a feeling of being uncertain in which direction the desired train would travel. It would be easy to imagine a C.S. Lewis character sitting bewildered, feeling permanently trapped in a moment of alienation.

It was a relief when the train finally arrived; a cheery Welsh woman guard stepped off and said they would have to go to a siding to allow a train scheduled for an earlier departure to pass through. Only when the train returned and we were aboard and heading south towards the Welsh border was there a sense of having escaped from the pages of a novel.