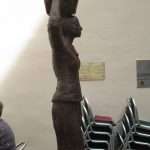 Labelling photographs on Flickr, a statue in San Sebastián, of a woman carrying a bread basket, tested the memory. Not only had the name of the sculptor been forgotten, even the name of the street could not be recalled from the recesses. A couple of searches on Google brought numerous images of the statue as well as much about the artist responsible. With access to the Internet, it seems now possible to have knowledge of almost any subject imaginable.

No longer is the ignorance that would hang a monkey excusable, for even the legend of the hanging of a monkey is now variously explained. The explanations of the pejorative accusation that various communities were the “people who hanged the monkey” include the suggestion that people from an English east coast town assumed a monkey that came ashore from a shipwrecked ship during the Napoleonic wars to be a soldier from the French army, because they knew no better. Even two hundred years ago, the story seems too far fetched to be credible; English sailors and soldiers had regularly encountered their French counterparts and would rapidly have dismissed the ridiculous assumption.

Yet sometimes the Internet seems more a place for those who would be ignorant enough to hang a monkey than a place where they might be educated and informed. As well as a platform for sharing good things, it seems to be a place for the extreme, the esoteric, and the plainly fruitcake.

The extreme includes the Neo-Nazi groups which propagate predictable lies and nonsense on websites, the addresses of which can sometimes only be found by reading the web pages of their political opponents, and the extreme Left which continues to pursue the vain hopes of revolution and the violent overthrow of the ruling classes, refusing to learn anything from 20th Century history.

The esoteric appears to find the Web fertile ground. Once isolated adherents of unusual philosophies and lifestyles have formed virtual communities: networks, blogs and forums where ideas are shared openly and where nothing seems too bizarre. The characters who inhabit the pages of Umberto Eco’s novel “Foucault’s Pendulum” seem to come to life on a computer screen.

Then there are the plain fruitcake groups. Google “Lyndon LaRouche” and Wikipedia says,

“LaRouche believes that a super elite (the “oligarchy”) is in control of world events, a group that includes the Rockefellers, the London financial center, the British royal family, the Anti-Defamation League, the KGB, and the Heritage Foundation itself. Others include Nazis, Jesuits, Freemasons, Communists, Trilateralists, international bankers, the American Civil Liberties Union, and the Socialist International—all supposedly controlled by the British—as well as Hitler, H.G. Wells, Voltaire, and the Beatles as representatives of the 1960s counterculture”.

To suggest that the people of British town once hanged a monkey would almost seem a rational and credible suggestion compared with the ramblings of La Rouche.

Allowing a platform to the conspiracy theorists, the paranoid, and the plain weird seems the price of being able to identify a Basque statue.