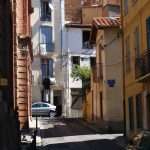 The car is packed and another French September beckons. An overnight ferry from Rosslare tomorrow evening and we will be on Breton roads on Monday morning. Our first September sojourn in France is now a distant memory. In 1993, with a child approaching three and a baby of five months, to head from Northern Ireland to Perpignan by car seems unwise in a distant retrospect.

The ferry from Portsmouth arrived in Le Havre while it was still dark. The queue to leave the port on a misty morning was lengthy. Not a police officer or customs official was to be seen, instead the delay arose from people pausing to avail of free bottles of Orangina that were being handed to anyone who sought them.

The journey south was punctuated with a stop in a logis where not a word of English was spoken. The landlady was warm and welcoming and the bed in our room was so wide that there was ample space for two adults with two sleepy children in between.

The campsite in the Auvergne was in the final days of its season. The mornings were sharp and cold. There were no more than a handful of people left around; the shop had nothing in stock and the bar did not open. By the morning of our departure, even the water supply to the caravan had been turned off.

The journey to the Mediterranean was marked by a steady increase in the temperature. By the time the resort in the shadow of the Pyrenees had been reached, high summer had returned. In towns and villages where the schools had returned, we pretended that it was still the holiday season. A day’s drive over the mountains to resorts in Northern Spain brought an encounter with places drifting into hibernation.

The final five nights in France were to be spent in the Dordogne, that most beautiful of the French departments. The campsite was steeply terraced with all its amenities at the upper end of the hill; the caravans owned by our holiday company had been placed at the lowermost part of the site. Every walk with the children meant a hard push with the buggy, we never went back to the place. Yet even a rude staff and an inhospitable site manager could not detract from the countryside and towns around.

It was the autumnal equinox by the time the return journey began. The weather broke on the final evening; the car was packed as raindrops bounced off the tarmac. Le Havre was reached in the evening; ten degrees colder, grey and damp.

The weeks had been neither restful nor cheerful; applications for a move to a different parish had met with rejections, trying to discuss the matter with a bishop while feeding a phone box with five franc coins had been the low point of the trip.

Perhaps it was about endurance rather than enjoyment, but a video from those days shows a cheerful little boy merrily riding around on his red tricycle. It is in such moments real happiness lies.