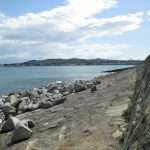 He reckoned he could do it in a week, or maybe ten days. If it worked, perhaps he could even put the journey down as a tax deductible expense; demonstrate to the accountant that it was a necessary piece of research, everyone else did that sort of thing. No-one he knew paid a fraction of the tax he paid. And why wouldn’t it work? Hadn’t Joyce himself made that journey and look at the inspiration he had found.

Planning the trip had not been easy, no-one else appeared to have travelled there overland, flying instead, in a three hours or so, but he had calculated carefully: three days would take him there. Anyway, Joyce hadn’t had the option of flying. Driving onto the ferry at Rosslare, he wondered what it must be like not to live on an island. Did being surrounded by sea make a difference? “Geographical insularity as a determinant of psychological insularity. Discuss”.

The crossing to Wales was uneventful. Finding a quiet corner he had passed the time asleep or ensconced in a detective novel. How he wished he had been a crime writer, the capacity to produce a regular flow of novels, a steady income. How did you have to think to be a crime novelist? Would you sit on a ferry and look around and spot villainy? Could the American and his wife perusing a map of Britain be couriers carrying drugs that had come by yacht from Europe to Ireland? Was the quiet man sat alone in the corner an MI5 agent returning to report to whoever now did George Smiley’s job?

West Wales was quiet, but once the motorway was reached, the traffic became steadily heavier as he moved eastward. He looked at his watch and tried to calculate the journey time to Dover. How long is a piece of string? Why not pull in somewhere for a meal and then reach the M25 after the worst of the traffic has passed? Of course, the traffic has never passed, and he crawled around London. Pulling into Dover docks, the ferry would be at 10 pm.

The cheap motel in Calais was one of those unmanned places. Enter your credit card number into a keypad and a key is dispensed in the slot below. Men in a white van pulled into the car park and loomed behind him. “Excuse me, mister, if we give you the cash, would you put our room on your card – we don’t have a credit card”.

“Yeah”, he thought, “put your room on my card and then clean out the room, leaving me to be charged for it”. He turned to them and said, “Sorry, this is my friend’s card, he is waiting inside for me.” He stepped sharply inside the door which swung shut behind him. “Do they think I was born yesterday?”

That the room possessed neither comfort nor character was of no consequence, he fell immediately asleep, being woken only by the sound of a cleaner pushing a trolley down the corridor. It was a good day for driving a 1,000 kilometres and he headed for the Belgian border with a sense of purpose.  Belgian roads were not the best; they did not match those of their neighbour to the south, but they did have that quality missing from most of the French autoroutes – they were free.

Germany offered the prospect of making rapid progress, he had heard tales of people driving legally at great speeds, except every section of the autobahn he encountered had speed limit signs – and while 130 kilometres an hour was not slow, it did not match the stories. Lunch at a service station allowed time to pore over a map: satellite navigation was all right, but it did not give you the big picture. His target was a town in Austria where he had spent happy winter days. It was evening time before he drove into the resort. It was raining heavily and the mountains were invisible. The meal was indifferent and he sat at a fireside reading. A place that had buzzed in January was coldly grey in August.

If not the sleep of the innocent, he slept the sleep of someone plainly exhausted. Waking before seven, he wondered whether it might not be wise to pause for a day; gather himself, have a look around, do some thinking. after the effort of the previous two days, a rest might be wise. Opening the curtains, the decision was made; the rain had not relented. Breakfast, refuel the car, and press on.

After the long Alpine tunnels, his spirits lifted. At the Slovene border, the sun was shining and he stopped for food. Summer had returned by the time he reached Croatia. The Istrian peninsula was but a short hop in the context of his journey and by eight o’clock he was enjoying dinner at a pavement restaurant. So this was Pula. Tomorrow would come the exploration; tomorrow the muse would be found.

Pula was undoubtedly a beautiful place, if one did not find inspiration here, where would one find it? He walked the streets wondering if Joyce and Nora Barnacle would recognize much of the place a century later. Sitting in the amphitheatre, he felt sure that Joyce with his eye for things human would have enjoyed such a location. He had his photograph taken beside the statue of Joyce, seated in a side street. But at the end of the day there was . . . nothing.

Perhaps he had read too much regarding the time spent here by the young couple; perhaps he had thought too much about how hard it had been for them to make ends meet, how Joyce had written home to Dublin asking his penniless father to send what he could; perhaps he had given too much consideration to what it must have meant to have spent all those years in exile. Perhaps he had wondered at how it must have felt to be feted by the world, but despised by those with power at home. Whatever the reason, there seemed no sense of inspiration, nothing that would turn into words.

He checked out of the hotel the next morning, driving northward in a heavy mood. The skies were blue and the roads clear and the progress was easy, out of Croatia, through Slovenia and Austria.

Leaving the autobahn in Germany, he drove into a spa town; small and neat with flowers and fountains, it spoke of past grandeur. The hotel was reserved, understated; dinner was served in a dining room empty except for an English family heading southward. He went for a walk through the streets of the town, passing buildings offering treatments and cures, most of which seemed to involve water. There was an elegance about the place, but it had lost its shine; would it be possible for such a place ever to return to former glories?

The next day’s driving was dull. He knew that if he reached Calais, an early boat the next morning would allow him sufficient time to reach Fishguard for an afternoon sailing to Ireland. Logging onto the Internet at a motorway service station, he booked a room in a motel near the docks.

An evening in Calais did not offer much by way of diversion. He visited one of the warehouses frequented by British visitors who would fill vans with cases of wine and beer to take back across the Channel, ostensibly for personal consumption. He pondered how much one person might consume. Buying two boxes of red wine, he returned to the motel. The food was bland and expensive and he spent the remainder of the evening flicking through television channels.

As someone who regarded journeys as being at their best if there was nothing by which they might be remembered, his travelling the next day was nigh perfect; even the M25 was moving smoothly. The Irish Sea was flat and the ferry punctual.

At Rosslare, a customs official gave him a desultory glance and waved him on – Ireland of the welcomes. At least it was June and the promise of summer lay before him. He had wasted a week (not to mention a lot of money), but what if he had not made the journey? Would he have said, “I never went to Pula”.

Driving through the gateway of his home, he wearily stepped from the car and opened the boot to take out his bag. A neighbour, walking his dog, passed the gate as he picked up his bag and revealed a case of wine.