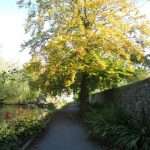 Keeping his eyes closed, he tried to slip back into drowsiness. The day that awaited was uninviting, to drift into sleep seemed much preferable.

The dream had been odd. He was at the gathering of a family unknown to him, a gathering so large that they had moved from their house to be seated in the street outside of their front door. Different family members were performing ‘party pieces’, a song, a piece of music, an Irish dance. He could not remember why he had come to be there and feared lingering lest it come to his turn to do something – he had nothing he could do. Perhaps waking at that point was a deliverance from one of those dream moments of severe embarrassment. Was the dream a sub-conscious declaration of deep-rooted personal insecurity? Or maybe it was due to the fact he just didn’t like parties.

He tried screwing up his eyes to close out the grey light that was slowly filling the room, but to no avail; morning’s progress was inexorable. Reaching toward the window, he lifted a curtain, the sky was on the floor: there was a wall of cloud and autumn mist, the one indistinguishable from the other.

Once a friend had complained of the darkness of Ireland, particularly in the short days. It had been a baffling comment, the friend had lived in Ontario for thirty years, the latitudes had hardly differed. ‘You don’t understand’, she said, ‘in Canada the snows would come and it would be minus thirty but each day would dawn with blue skies and sunshine – the light would be dazzling, we did not endure month upon month of half light’.

Maybe it was the light, or the absence of it, that shaped the mood. Canadians he knew seemed to exude positivity; they were serious, but there was nothing that could not be managed. Maybe it was not just the light, maybe it was the temperature as well, at minus thirty daily routine is about discipline, about organisation, about survival. There was no room for casualness if being casual was the last decision you might make. The temperature said, ‘Hey, you, get out of that bed, there is stuff to be done in order to be alive’.

He lay with his hands folded behind his head and felt a certain sense of relief that he was not Canadian, though that did nothing to improve the prospects of the day ahead. He wondered about time, why wasn’t it constant? Everyone knew that time passed much more quickly at weekends and on holidays than it did during the rest of the year; he also had a theory that Mondays occurred much more frequently than Fridays, though found this difficult to substantiate when faced with a calendar.

The sound of others going about their morning routines forced him to accept that there was a day to be confronted – albeit that the confrontation was met with a half-hearted timidity. He tried to remember the name of the man who had been Einstein’s maths professor. Minkowski, was it? The stuff about space and time being a continuum, that time happened all at once and that past, present and future were no more than convenient illusions that helped to avoid the confusion that would arise if people were presented with the whole of time in an instant.

Minkowski’s idea seemed always an inviting prospect; if time happened all at once, if everything was simultaneous, then why might it not be possible, theoretically at least, to close his eyes and wake up not on a grey autumn morning in Ireland, but on 1st August with his holidays ahead? There was something he had once seen on an episode of “Dr Who” about it being against the laws of time to go back and change things (of course, “Dr Who” was fictional, but so, it seemed to him, were many laws by which people were expected to live their daily lives). Anyway, he wouldn’t have wanted to go back to change anything, there were plenty of happy moments that would bear constant repetition, just as he had played and replayed records in his teenage years.

Why could he just not slip from pleasant moment to pleasant moment, spending his days in a circle of happiness? Kurt Vonnegut’s book “Slaughterhouse Five” had been based on that premise, the character slipping from one time to another, though he hadn’t been able to control where he might arrive and had to encounter unpleasant times. No, he wouldn’t want to leap around time in an uncontrolled way, he wanted to be able to choose: August days would feature strongly in his schedule.

Even a combination of Minkowski and Vonnegut was not sufficient to stop the hands of the alarm clock which had moved at an alarming speed during his pondering of the nature of time. Pushing a foot out from the warmth of the duvet, there was a physical sense of the autumn. He had hoped to delay turning on the central heating until October, the level of oil in the tank fell as quickly as summer days passed, but he would succumb to the temptation of warmth.

“Are you not out of bed yet?” His mother’s voice echoed through the years. He would never have risked sharing with his family his speculations regarding the nature of time. His mother, a firm pragmatist, would have looked at him and said, “such nonsense”.

A few more minutes and he would have to accept that he must move. He went through a mental list of items on the agenda for the day. Nothing daunting, just an unimaginative routine. It could be worse, he could be stepping out the door of a house on the Canadian Prairies, knowing that snow was only weeks away, or he could be in the pages of a novel, facing danger, uncertainty and an arbitrary predetermined fate. All things considered, it was not such a bad day to be waking.

At that moment, his phone began to ring and the day had begun.