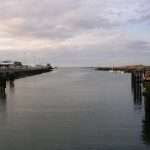 A warning tone came from the car dashboard; “Risk of Ice”, the display flashed. A squall brought a winter chill to the day, ominous dark clouds loomed over the Slieve Blooms. It being 10th January, there could hardly be cause for surprise, the country wisdom used to be that as the days grew longer, the cold grew stronger. Nevertheless, one can always hope for mild days, enough mild days to reach February, or even March; days when the threats of icy roads and winter storms had receded. The days after Christmas seem to drag. The New Year comes in with promise and then January hangs on one with all the cheer of Job’s comforters, the light returning in small increments, the mood heavy.

Perhaps radio presenters know what is required on cold winter days, something uplifting, encouraging. Lyric FM played Waltz Number 2 from Shostakovich’s Jazz Suite No 2. For many thousands of travellers crossing the English channel, it is the music of summertime and holidays. In times when we would head off on an overnight  car ferry from Portsmouth to Ouistreham in Northern France, Brittany Ferries would waken those in its cabins not with an alarm call but with that piece of music.

In all the times I heard it, the best I could ever have said was that it sounded like a waltz, a piece that would have carried you around the floor, if you were able to dance (a skill, which along with music, that has evaded me). It was not until driving a country road one afternoon, that its identity was revealed when it was played on Lyric. The Jazz Suite was  about, well, just about optimism. For us, Shostakovich’s notes were about anticipating the long drive south to the vast Atlantic beaches and the sharp peaks of the Pyrenees,  to the Basque lands and the waters of Biscay. For the hundreds of others on the ferry, the music could have been the prelude to Paris, or the Dordogne, or Provence, or the Mediterranean, each destination with a magic of its own.

The music evoked memories of leaping from the bunk and shuffling around the four-berth cabin in the darkness, in the imitation of a waltz, to the annoyance of its other occupants. The Normandy coast was approaching and there was nothing that could suppress an overwhelming sense of exuberance.

In the midst of a January day, there was a moment of France in August. Music can change an entire day.