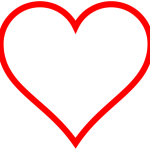 Love doesn’t change, so here is a story from some years ago for Saint Valentine’s Day.

For three years in the late 1980s, I drove a red Austin Metro.  The car was a real Friday afternoon job – rough edges, poorly finished and badly equipped.  Its greatest lack, as far as I was concerned, was a car radio.  My Dad had driven cars in the 1960s with excellent radios, but this 1986 example of British workmanship had nothing.

Irish roads in the 1980s were of only marginally better quality than Austin Metro cars and journeys cross country were long and tiring.  Setting out from Oughterard in Co Galway to drive to Newtownards in Co Down on a Friday morning in May of 1989, the prospect was for a long day’s travelling.

Deciding to try to reach the tarmac of Northern Ireland as quickly as possible prompted turning towards Mayo and Sligo instead of heading towards Athlone.  Once Sligo was reached, Co Fermanagh and roads devoid of potholes would be a more immediate prospect.

Somewhere on a road in the south of Co Mayo, a hitch hiker stood at the roadside; the large rucksack at his feet was sufficient to mark him out as an overseas visitor.  I pulled up and asked him where he was going, ‘Ballyshannon, I hope’, he replied in impeccable English.

We chatted as we drove along.  He was Dutch and it was his second trip to Ireland.  He was staying in youth hostels as he travelled around the country.

He smiled.  “When I was here last year, I met a German girl.  We travelled together.  When we reached home though, we decided we lived too far apart – nothing could come of our friendship”.  There was a tone of sadness in his voice.

Approaching the Co Sligo border, there was a heavy shower of rain.  Ahead at a crossroads, a figure in a yellow raincoat with the the hood pulled up stood with a thumb out; more in hope than expectation.  Because it was raining, I thought taht it might be possible to have two hitch hikers with two rucksacks in an austin Metro.

“Can we fit another person in?” I asked my companion.

As we slowed, the figure at the roadside pulled back the hood of the yellow coat.

“It’s her”, exclaimed the Dutchman.

“It’s my girlfriend from last year”.

He leapt from the car and they embraced.  The remainder of the journey with them was filled with excited conversation about all that had happened since they had parted.

I drove them to Ballyshannon and wished them well.  Perhaps I should have kept in touch, but their future happiness seemed in little question, any relationship that can be rekindled by such an incredible coincidence would be bound to survive against all odds.