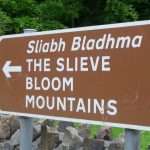 Attending seniors’ dinners at Camross and Borris-in-Ossory earlier in the year, I twice heard Martin Delaney singing the Co Laois ballad, “The Mountain Hare.” The song was enigmatic, why was Fint Phelan being hunted and was he due to be hung in Mountmellick? The words Martin had speak of “verses nine”, it seems two are missing. If anyone has information on this Slieve Bloom song, it would be fascinating to hear the full story of the Mountain Hare.

Come all you jolly heroes, who live near Glendine
I hope you’ll pay attention to these few feeling lines
concerning a young mountain lad who lately has come down
and strange to say got bad fairplay, all in his native town.

The whole promoter of this row, his name was one Ned Bell
where his ancestors do reside, no Irishman can tell.
He came a drover to Campelone, no man can tell from where,
that was the boy thought to destroy our charming Mountain Hare.

The man you call the Mountain Hare, Fint Phelan is his name.
A third class man detected him, the country knows the same.
They took him to Mountmellick, where they right and wrong did swear.
For one long month, they did well hunt our charming Mountain Hare.

The hardest heart would soften to see him, marched throughout the street,
fatigued and tired, he wore a smile for everyone he’d meet.
He marched with them quite peaceable, till he came unto the Square,
“Farewell, my boys”, Fint Phelan cries, “it’s the Mountain Hare”.

The huntsman, he being on the ground, let loose his six black dogs,
they chased him through Irishtown, across Clontuwra bogs.
Some of them cross-cutted him, others laid a snare
And by bad fairplay, he gained the day, our charming Mountain Hare.

The huntsman’s name being Barry, he was head until that day
but now he’s lost his title, likewise reduced his pay.
He wore three stripes upon jis sleeve, but now his jacket’s bare.
He may sore lament the day he went to hunt the Mountain Hare.