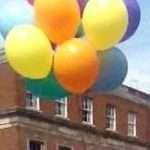 In Left-wing circles in college days in London there was a story that, in 1917, the Russian bishops were discussing the colours to be used in the celebration of Easter when the revolutionaries burst through the doors. The story probably had not a shred of historical truth, but it encapsulated people’s  attitude towards the church, that there was a revolution at the door and the church was concerned only with its own liturgical arrangements; that it was irrelevant.

Whether there is any basis in truth for the story of 1917, there is no doubt that the Church of Ireland bishops of 2015 will be worthy of a place in future mythologies. Faced with a social revolution, of which the marriage equality referendum was only an expression, they issued a press release about their liturgy, for that is the only thing over which they have power:

“The archbishops and bishops of the Church of Ireland wish to affirm that the people of the Republic of Ireland, in deciding by referendum to alter the State’s legal definition of marriage, have of course acted fully within their rights.

The Church of Ireland, however, defines marriage as between a man and a woman, and the result of this referendum does not alter this.

The church has often existed, in history, with different views from those adopted by the state, and has sought to live with both conviction and good relationships with the civil authorities and communities in which it is set. Marriage services taking place in a Church of Ireland church, or conducted by a minister of the Church of Ireland may – in compliance with church teaching, liturgy and canon law – continue to celebrate only marriage between a man and a woman.

The irrelevance of the bishops in 2015 is made clear when one realizes the reality of the church behind that press release. The Church of Ireland was already small, but according to a church census in 2013, attendances in its most populous dioceses have collapsed to a small percentage of those who claim to be members: in Down and Dromore diocese, just one church member in six actually attended, in Connor diocese it was even worse, just one in seven. The church leaders opposed to equality, who comment upon a majority decision, do not command the attendance of the majority of even their own adherents.

If irrelevance was not a sufficient failing, the press release itself is a piece of silliness. It asserts, “the people of the Republic of Ireland, in deciding by referendum to alter the State’s legal definition of marriage, have of course acted fully within their rights.” How patronizing, presuming to tell the political leadership of the country and the electorate who voted “yes”, that they have acted “within their rights.” Are the politicians who command rather more support than the bishops supposed to be impressed? It is like something from the Skibbereen Eagle, which warned Tsar Nicholas of Russia in 1898 that it “will still keep its eye on the Emperor of Russia.”

All the bishops have done is to confirm to those on the Left, and to the secular world generally,  that churches have not changed much in a hundred years.