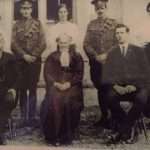 I bought prescription sunglasses earlier this year. They aren’t designer sunglasses, they aren’t trendy sunglasses, and they weren’t cheap sunglasses, but they were welcome. Maybe there is a medical explanation and maybe there is not, but on bright sunny days when the pollen count is high, they seem to make my eyes feel easier. Never having been a sunglasses wearer, one pair of glasses at a time being expensive enough, they are a new experience – things look different. The polarising lenses mean the patterned structure of the car window can be seen, and, beyond it, the colours are all deeper. Watching passing hedgerows and trees, there seemed to be far more shades of green. Lifting the glasses, in the glare of the sun the contrasts and the depths disappeared.

Which is the real view? It’s like the pictures of stars and planets which are presented in deep colours, the images from space are monochrome, but are enhanced to capture colours that cannot be seen. Is the real view the grainy monochrome pictures taken through the telescopes or that which appears on glossy magazine pages?

We have photographs of Katharine’s family, taken before or during the First World War. There is a family group, the austere looking parents in late Victorian dress, sat at the front, with their offspring standing beside and behind them. Two men are in military uniform, one of them has a waxed moustache. The photograph is taken outside a house in the country. It is a picture that is ordinary in every way, a carefully posed photograph that would become a family treasure. Each family member would probably have a print of it, framed and hung on the wall of their homes, an heirloom to be passed through the generations so that, more than a century later.  It is a good photograph, but it looks as if something might have been added. In those times before colour photography had been invented, some photographers would tint their prints to try to create the illusion of colour; it was not very convincing, but it added detail to the print that was not otherwise available. There is a hint of tint in the photograph. Which would have been the real view of the family? Is a monochrome print more honest than one that has been tinted?

If even straightforward everyday pictures are a matter of how people see them, how much more complicated are those things on which people in a family, or a church, disagree?