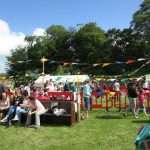 The forecast was bleak, overcast, bursts of heavy rain, strong winds, temperatures below average, it seemed set for the sort of bank holiday Monday that featured in so many childhood memories. Perhaps it was an effect of watching Disney’s “Inside Out” at the cinema last night, a determination that joy would have the upper hand, but, despite the forecast, plans were made for today. Co Laois offered events that would fill the morning and afternoon.

The 51st annual steam rally at Stradbally was excellent value for the €10 admission fee. Tractors that spanned the century since the Great War; cars and lorries that conjured memories of a 1960s childhood; traction engines, and steam tractors and steam rollers, that were the stuff of storybooks, one dating from 1879. The engineering and the craftsmanship in the great iron machines spoke of a confidence in the present and an optimism  regarding the future that would be destroyed by war and economic decline. The intricacy and artistry of the paintwork and brass, the individual identity of each vehicle, all would disappear when the age of mass production began and utility and functionality superseded the old crafts. Watching the engines rolling around the parade ring, there was a thought that they probably looked now as they had at the first rally fifty years ago, and as they might at the 101st rally in fifty years time.

By mid-afternoon, it was time to move on and to go to the fifty-third annual fete at Abbeyleix Rectory. The occasion is as timeless as the traction engines, marquees and bunting and all that one would expect from a traditional garden fete. Stalls and sideshows, raffles for a live lamb and chopped firewood, fresh baked cakes and cream teas and meeting those one might have seen in months, or even since last year’s fete. A colleague had come in a striped blazer, it blended perfectly with the ambience of the gathering. The rector of the parish presided, keeping a watchful eye on all that was taking place. The air was filled with conversations and laughter, the absence of a clerical collar did not mean not being instantly recognized and greeted.

From Abbeyleix, the journey was short, down the road to Durrow to survey the entrants in the annual scarecrow festival. The All Ireland Scarecrow Championships have been a huge success, drawing thousands of people to the village. Each year the entries have become more ambitious, those this year included a great dinosaur made of straw. The only charge was if one wished to go into the scarecrow village, a €2 entrance fee, a small charge for the time one could have passed.

At the end of the day, there is tiredness. Outside, the wind is driving the rain against the windows. But today the sky was blue, the sun shone, and the day was warm, and the coats and umbrellas were redundant.

Defying the forecast and heading out for the day had not proved to be the silly decision it might have seemed. The philosophy of “Inside Out” seemed vindicated.