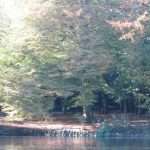 The three weeks of holiday are over, the sky is grey and Ireland is distinctly cooler than Gascony. A way has not yet been discovered to apply Einstein’s theory regarding time.

A friend once commented that she felt that something had been borne out by Einstein’s theory of relativity. Never too hot on physics (my scientific education never ran beyond an English CSE in General Science). “Mmmm”, had been the only reply I could manage. In our house Einstein was often cited as a reason not to worry about brushing one’s hair and it was only by reading Bill Bryson that I discovered that there were two theories of relativity, one special and one general. In the case of Einstein, very special and most special would seem more appropriate. Anyway, Einstein, as I understand him, seems to suggest that the time-space continuum bends, and that at as you approach the speed of light, time slows down.

The vessels sailing from France to Ireland probably do not approach the speed of light, they would probably overshoot Rosslare and end up in Dublin Port if they attempted to do so, but travelling on them does seem to cause a change in the speed of time. Going to France at the end of August and coming back this morning, there is a sense of having been away for a great length of time, for having been away for so long that the world must have changed and something interesting must surely have happened.

Of course, nothing has changed. The same politicians are on the news, the same issues are being discussed. The mail delivered during our absence was predictable, circulars, junk mail and bills. Gone are the days when there might have been the odd hand written letter from someone interesting, and the day has never come when there is a letter from a solicitor saying a previously unknown relative has died and left me a fortune.

Sometimes I wonder if, like some character from science fiction, there might be a year when I could get the car up to light speed so as to go back to the beginning of the holiday in the hope that when the end of our time away comes round again, the world might have changed, and if it hasn’t, well the car will just be started up again and we will go back to the start.