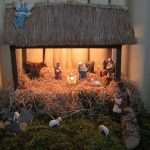 It is ten years since Peggy was last with us for Christmas, though I fancied I heard her voice in the kitchen this afternoon, calling out to my wife, “Katharine, do you think these vegetables are ready?” It was an odd thing to imagine, Peggy would have known to the second when vegetables were ready.

We still miss her on Christmas Day. One far more eloquent than I wrote her own reflection on the day we bade farewell to Peggy, on a bright August day in 2006:

I remember the day of my grandmother’s death as being a bad day for two reasons. One, because my nana died and two, because I had to get braces that afternoon.

But in a strange way, the day of the funeral is almost a happy memory, a day when our family as a whole seemed content, at peace as we knew Nana now was.

I wish I could say she was a fantastic woman who was famous or beautiful or did something extraordinary in her time. And maybe she was, and maybe she did, but I just remember little old Peggy Noble, with grey old lady curls and blue eyes hidden behind thick windowpanes of glasses, who sat in her favourite chair every afternoon to watch Countdown and always smelt of talcum powder.

But it’s surprising how in over eighty years little old Peggy Noble touched so many people’s lives. There must have been two hundred people in the church, most of whom I didn’t know. The bishop came especially to preach. It’s strange that during that sermon I learnt more about her past than I ever had before. That my great-grandfather had owned a quarry. That she had a sister who died young. That my grandpa hadn’t always been a priest.

I’ve heard that people cry during funerals, but I’ve only ever been to one so I don’t really know. I only cried at one point, and really, it was out of laughter when the bishop reminded us all of Jerry, the neighbours’ cat who Nana always fed. He was enormously fat, but she still bought cat food for him because she said the neighbours didn’t feed him enough.

There was no big dinner reception planned, not for little old Peggy Noble, but the Mothers’ Union made huge plates of finger sandwiches and cupcakes which were all snapped up minutes after I arrived. Suddenly, it wasn’t a funeral, it was another gathering of people I half-knew who all wanted to talk to me, about life “down South” and if it was different there, about school, about my summer holidays. The removal to where my grandpa Bobby was buried long before I was born took a matter of minutes.

Any nerves or sadness I had slowly began to vaporise as we sat in Nana’s tiny kitchen where we had found a box of unopened Roses. “Hey!” my eldest cousin, Patrick, a man in his thirties exclaimed. “Why do they never put any strawberry ones in anymore?”

My other cousin and my brother both looked down a little guiltily and we all burst out laughing.

I suppose that all of us then did what our family seems to do best: getting on. You can’t pause, was our philosophy at times like this. Once you get on, once you start clearing out the attic or cleaning it all seems so much better. So that is exactly what we did. I began to go through the magazine and book rack next to the TV, throwing out what could go and keeping what we wanted. I found an envelope where she had stored copies of all five of her grandchildren’s school reports. My cousin Andrew climbed into the attic in his very best suit to take things out. My mum began sorting through trinket boxes. With little old Peggy Noble gone, the things in her house were just things in a house. And when we finally and almost simultaneously sat down out of exhaustion, the cry went up, “Who wants fish and chips?”

In eating that takeaway, it was as if we had found solace. Sure, Nana was in heaven with angels to serenade her, but we had proper chips hot from the bag and dripping in vinegar.

Perhaps some people cry at funerals. Death is pretty sad even when you don’t have to get braces. But perhaps funerals don’t need to be sad. I’m sure Nana, little old Peggy Noble, whose life was simple and content didn’t want tears except those of laughter at hers. Maybe, in a way, she was missing out. She would have loved to hear her life retold by a bishop, she would have sat down in the church hall and be surrounded by people eager to talk to her. She probably would have recited a poem she had learnt in primary school. And she certainly would have loved the fish and chips.

Wherever she is, I hope it’s somewhere with a comfy chair and Countdown on every afternoon, where she can look down on us and maybe even whisper in our ears the identity of the strawberry Roses thief, and I’ll bet that at this moment, little old Peggy Noble is smiling at me. 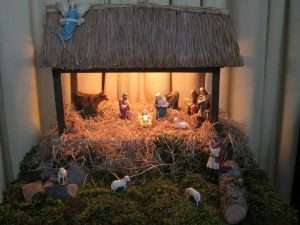