The port of Holyhead on a dark night – it does not seem so long ago since a first visit to this most prosaic of places.

A rock festival had been attended at Castle Donington and then there had been a journey to South Yorkshire on a Sunday and an August bank holiday spent visiting a castle. Perhaps it was the Tuesday, then, that we had journeyed to North Wales, expecting to stay at a youth hostel in Bangor, except it had been full, there had been no possibility of squeezing in two extra, we would have to search elsewhere.

There had been no plan B, our itinerary had been to stay in Bangor in order to travel into the mountains and then to travel west to cross the Irish Sea for the first time. If Bangor was off the itinerary, then the westward journey would have to continue. The train on to Holyhead departed well after midnight, as well it might, it connected with an 0315 sailing for Dun Laoghaire. We sat in a pub in Bangor, eking out the pints we had bought. There was a juke box filled with oldies, except in 1981, they were not so old. A clear memory remains of putting a coin into the machine in order to hear Tina Turner singing “Nutbush City Limits.”

Irascible would best describe the mood when we arrived in Holyhead, it must have been around 1.30 am and the possibilities for diversion were not plentiful. The port offered a cafeteria with plastic seats and we went to sit and await the arrival of the Sealink ferry. The wait cannot have been so long, but in memory it seems hours. Tired, unwashed, uncertain about what lay ahead, we sat on opposite sides of a Formica-covered table, too uncomfortable to sleep and too irritable to make further conversation, if a pair of twenty year olds had anything left to say after a day of rail travel.

In memory, we had travelled without a single book between us and certainly without a newspaper, for the memory remains clear of buying a copy of the Daily Telegraph at the exit of the Carlisle Pier in Dun Laoghaire in order to keep abreast of developments in that turbulent summer in Irish history.

Of course, the hours would be passed quickly now. The free Wifi that reaches our car from the terminal building offers access to a world unimagined in that distant night.

But it is only because of that distant unplanned night in Holyhead that I arrived in Killarney on 1st September and met tonight’s companion in the car. 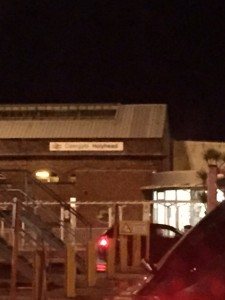