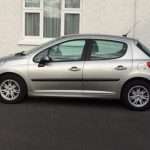 I didn’t want to move, but few of us go through life without having to do things we don’t want to do. The parish to which it was intended that I should move did not want me, and I had to find work in a distant place from our intended new home in Kilkenny. It would mean a thirty mile journey just to reach the scattered group of six rural churches, a situation very different from a compact single church parish in south Co Dublin where the whole parish was within walking distance of the rectory. So it was that, in the spring of 2010, I had to think about changing my car.

My Nissan Almera was ten years old but had only done forty-four thousand miles, it would have been good for years more were it not for the fact that its 1.8 litre engine with automatic transmission did only thirty-two miles on a gallon of petrol. To have brought it to a country parish would have been very costly.

An Internet search found a car at a company called Motorvation; they specialised in more expensive sorts of car, a Peugeot 207 did not reflect their usual stock. Three years old, diesel-engined and with just 42,000 kilometres (26,000 miles) on the clock, it seemed perfect for purpose.

Taking it to Eric, the mechanical genius who has maintained it for the past six years, for the first time, he was dubious about the car’s prospects. “What are the roads in France like?” he asked.

“Because French cars are sometimes built for French roads and not for the potholes of Co Laois. The car has a great engine in it, but will probably fall apart long before the engine does.”

It didn’t seem a very cheerful prospect, particularly for someone who is generally a mediocre driver and sometimes a bad one. Cars have always been about getting from one place to another, they have rarely been clean and they have never been cherished.

Last week the dog needed to go to the vet, which meant that the back seat was covered with hairs, which would probably have remained for some weeks had it not been for the fact that I was to drive people to Dublin on Sunday. The vacuum cleaner gathered months of dust, dried mud and gravel from the carpets and miscellaneous crumbs from the seats. Having half an hour to spare in Portlaoise yesterday, the prospect of getting the car handwashed for €6 was too much of a temptation – there was not even a queue.

But an odd moment came yesterday in Tesco’s car park. Walking up and down the lines of cars, I could not spot my own. Finally, I stood back and looked for the number plate. It had become unrecognisable when stripped of the mud and grime that had accumulated over a period of months. 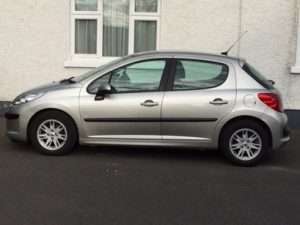