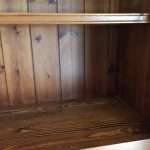 The books were left on the shelf by a colleague. He spent three months in the parish the year before he was ordained, and being short of cash, would buy second hand books to read in his spare time. His tastes were eclectic, and non-fiction took priority over novels. When leaving at the end of the summer, he said there were some novels he was not taking, if I didn’t want them I could feel free to take them back to the second hand shop, or put them in the recycling bin.

“Leave them on the shelf on the dresser,” I said, and he did – in September 2011. The books had lain at one end of the shelf from that day until now, until this evening I felt they should be moved before the fifth anniversary of them being placed there was reached.

With only myself using the rectory, it is a Spartan, austere place. I remember buying light shades a year after I arrived, not because I was worried by bare light bulbs, but because a group of Mothers’ Union ladies were coming to the house and I suspected they might notice the absence of shades. Not staying here overnight very often, I only bought beds when the colleague was due to come to stay, prior to that I had slept on a mattress on the floor.  It is not that I like austerity, just that there seems little point in doing things for myself.

In student days, one could immediately tell the gender of the occupant of a room in a hall of residence. Girls’ rooms were usually full of life and colour and comfort, they would have posters and pot plants and fancy lights. Boys’ rooms, where it was safe to enter at all, tended to be stark and bare and functional. The perception didn’t always apply, there was a friend at Sussex who had a wine rack and cheese plants and Athena posters in his room. (I wondered in later years if the fact that he was gay made a difference to his attitude to his living space, gay people I knew always seemed to have a strong sense of aesthetics).

There are bachelor colleagues who have turned their houses into places that are comfortable and welcoming, who would be baffled at my austerity (and who would certainly be baffled that a pile of books might be left lying in the same place for almost five years), but I am not like them. Were I not married, life would be miserable.

A clean shelf is at least an improvement. 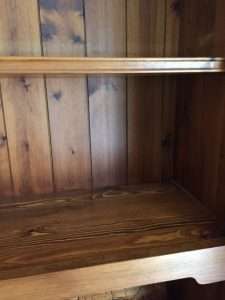