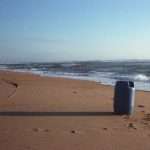 Sometimes, years can slip by without you noticing. You look back and wonder how you came to be where you were, how the time simply went by when you weren’t really thinking about it. Seventeen years had slipped by between visits to south-west France, and now it is ten years since our acquaintance was renewed. The following was written on 25th August 2006. Ten years slipped by.

The last time I had stood on a Landaise beach was 1989.

In 1989 we stayed in a tiny place called Messanges. There wasn’t much there then, and it remains a quiet and unspoilt spot. We drove there one evening last week to revisit the place.

The beach was as spectacular as ever, and, although cloudy, we got something of a sunset. There was a timelessness about the place – the sea and the sand have been there for millennia and will be there for millennia to come. There was a reassurance that human powers are trivial and insignificant; that the highest political figure was a momentary flash compared to the enduring years of the handful of sand that I picked up.

Memory does rewrite the script though. In my recall, the beach swept forever in both directions. Last week it had changed, it swept southwards until it hit the Pyrenees, which loomed up out of a misty horizon. Almost tempted to say, “I don’t remember those last time we were here”, I realized how ridiculous it would sound. Memory does that – it irons out the bumpy bits, smoothes out the creases, repaints the landscape. Even edges as jagged as the dark Pyrenean mountains can be rounded off in our recounting of the past. A reminder to me, particularly in the life of the church, that golden ages weren’t as shiny as they appear in retrospect. 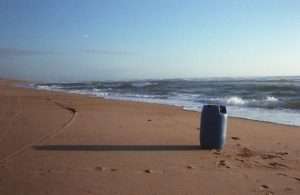