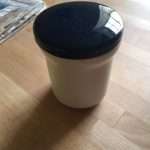 Christmas is well past and a smidgeon of Stilton cheese still remained. Finishing it with relish, it seemed a pity to throw away the pot in which it had come. With the transparent plastic cover removed, it was placed in the dishwasher with the dinner dishes.

The washing cycle complete and the clean plates being put away, the pot caught an eagle eye.

The Best Beloved looked at me, intently, “a day of reckoning is coming!”

It would have been fruitless to have recounted the story of Eeyore’s birthday and how pots might be put to unexpected uses.

Pooh had set out with a jar of honey, but had eaten the contents on the way, leaving only an empty jar to give to Eeyore. Piglet had run along with a big red balloon for Eeyore, but had fallen on the way, bursting the balloon, and had only a piece of damp rag to give Eeyore.

“Thank you, Piglet,” said Eeyore. “You don’t mind my asking,” he went on, “but what colour was this balloon when it – when it was a balloon?”

A burst balloon and an empty jar had hardly the makings of a happy birthday, but Eeyore suddenly demonstrated an extraordinary capacity for making the best of his circumstances.

“It’s a Useful Pot,” said Pooh. “Here it is. And it’s got, “A Very Happy Birthday with love from Pooh,” written on it. That’s what all that writing is. And it’s for putting things in. There!”

When Eeyore saw the pot, he became quite excited.

“Why!” he said. “I believe my Balloon will just go into that Pot!”

“Oh, no, Eeyore,” said Pooh. “Balloons are much too big to go into Pots. What you do with a balloon is, you hold the balloon ”

“Not mine,” said Eeyore proudly. “Look, Piglet!” And as Piglet looked sorrowfully round, Eeyore picked the balloon up with his teeth, and placed it carefully in the pot; picked it out and put it on the ground; and then picked it up again and put it carefully back.

“Doesn’t it?” said Eeyore. “It goes in and out like anything.”

“I’m very glad,” said Pooh happily, “that I thought of giving you a Useful Pot to put things in.”

“I’m very glad,” said Piglet happily, “that I thought of giving you something to put in a Useful Pot.”

But Eeyore wasn’t listening. He was taking the balloon out, and putting it back again, as happy as could be . . .

A useful pot can make one as happy as can be. 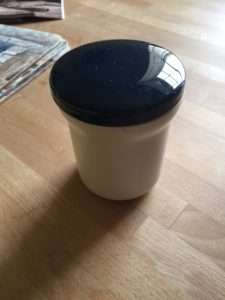