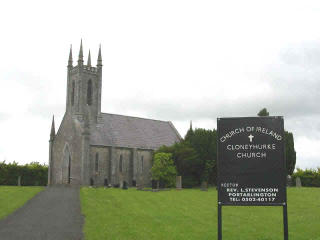 I went to preach at a little church in Co Offaly yesterday afternoon. It was a place unmistakeably much loved by the few dozen souls who worship there. The churchyard was a picture of perfection; grass mowed to no more than half an inch; looking at the rota inside the porch, this seemed to be a fortnightly occurrence. The interior was immaculate; a new leaded glass east window had been recently fitted at the cost of €25,000.

It was harvest festival and the church was filled with people of all ages. As the opening bars of ‘Come, ye thankful people, come’ were played; the building filled with sound. Every hymn was sung with the same gusto, these people meant what they said. I smiled as I thought of a piece that Kevin Myers once wrote in the Irish Times suggesting that half a dozen Protestant old ladies could generate a volume equivalent to that of a Saturn V rocket

The church was one of six in the parish; each had its own harvest festival and yesterday was the fifth service out of the six the Rector would lead. Yet there was no flagging in the enthusiasm of the parishioners, some of whom would go from church to church attending the services over consecutive Sundays.

They listened respectfully to the sermon and shook hands warmly after the service. I suspect the sermon was fairly incidental to the singing of the hymns and the marking of another year blessed by God. There was a depth of faith and a spirituality here that would not be fathomed by an outsider passing through.

Big, quiet men and ladies in their Sunday best. People who had been in this place for generations and whose care for their church and their burial ground suggested they intended to be there for generations to come. Lest anyone think that these were inward-looking people, the offering was for the Church of Ireland’s world development appeal; there was a huge collection.

The spiritual strength of the Church has always lain in the rural areas; places where the idea of God chimes with the rhythms of everyday life. The challenge for the Church, if it is to survive in an increasingly urbanised society, is to learn the lessons of rural life and to plant what is learned amongst the ever-expanding fields of concrete, brick and tarmac.