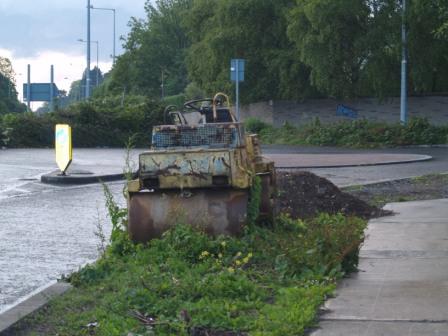 I have lived in Ireland most of my life. I like living here, my wife is Irish, my children are Irish; even my loyalties are Irish. One of the things I loved about being here was that it wasn’t England; it wasn’t governed by pettiness and political correctness. I am worried that both diseases have arrived on these shores.

We are in a new house. The house next door to us is still being built. The builder used a road roller when laying the driveways in both houses. The roller was parked on the verge after the work was complete. It was causing no harm to anyone; it was outside the house of no-one except me.

The roller won’t go anywhere at the present time because someone has poured sand into the fuel tank. The builder has not yet got the engine fixed. The roller has sat at the roadside for some weeks, but it’s not in anyone’s view.

Last week a man driving a car which was obviously designed to shore up his ego stopped at the gate and asked who owned the roller.

“The contractor.” I replied.

“When’s it being moved?”

“When the sand is cleared out of the fuel tank.”

(The builder’s son may not have helped matters at this point by interjecting that it shouldn’t take more than a year).

This morning a harassed sounding man from Dun Laoghaire-Rathdown County Council phoned me. “I have had a complaint about a steam roller parked outside your house from the Environmental Protection Agency Hotline. When is it going to be moved?”

I hadn’t heard of the EPA Hotline let alone had imagined that our road roller would figure so highly in its list of priorities. The pettiness of it was astonishing. If the man wanted to complain he could have phoned me – no wonder he needed a big car. It was worthy of English suburbia at its worst.

Responding to the Co Council I expressed the hope that the EPA were as diligent in their treatment of all groups in society. There is a political correctness that says it’s all right to harass law abiding people, but under no circumstances must we say anything about those who leave a trail of debris wherever they are. Political correctness is deeply discriminatory and racist.

We seem to have caught diseases from England.