Do you remember the Irish road works in the early 80s? There would be few under forty who would recall them now.

There wasn’t money in the County Council budgets for the plastic cones that proliferate everywhere, instead oil drums were used to mark road works in the country. Painted yellow and black, they were a tougher proposition than orange cones. Of course, even oil drums were not plentiful, were difficult to transport, and not easily handled, so sometimes even quite substantial excavations would be marked by no more than a handful. A colleague from the north once lost his sump on a main road when hitting an unannounced ramp at forty miles per hour.

Giving out about Ireland is easy – the hospitals are chaotic, the city roads log jammed, the drugs trade seems to grow exponentially (leafy Carrickmines the scene of the latest massive seizure of cocaine), and graffiti and vandalism abound. The list of grievances could have gone on to include political corruption, inflated prices and confiscatory taxes, but when the RTE news gets too much, I remember the oil drums.

If the oil drums were a mark of the old Ireland, the 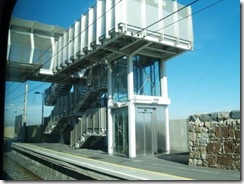 railway footbridges are a mark of the new. In the 1980s a footbridge over a railway line would probably have been a rusting relic from Victorian times, now we have fantastic structures in concrete, steel and glass that would grace any airport, they come complete with lifts for people with impaired mobility.

“They’re a bit over the top”, a friend commented. Maybe they are, but the Victorians were very over the top with their great edifices in brick and iron, and left a great legacy that still endures.

Stories of problems in hospitals, of bus drivers striking about where they take their tea breaks, of disputes at Dublin airport, recall the news stories of the 1980s and the grimness of so much of Irish life in those times. But until the footbridges stop being built and the oil drums reappear, things are infinitely better than they were.