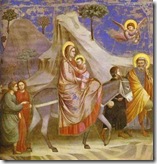 Life returning to normal means the Christmas cards all coming down. The usual selection of snow-covered cottages, assorted Santas and cosy Yuletide scenes was accompanied by various pictures of the stable, the shepherds and the wise men. Perhaps some Christmas cards are chosen carefully, most times we just take a pile and write to the names on the list.

How often do cards showing the flight into Egypt make us stop and think?

There is a nice picture in front of us, a night sky and Joseph walking in front with Mary and the young Jesus riding on a donkey. The disturbing reality, that they are running away from the bloody slaughter of children by Herod’s men, gets lost in the brushwork of the artists and in our desire for a cosy festival.

Fleeing for our lives is not common in our experiences. Even the North is quieter now and the sectarian violence, driving Catholics from Protestant areas and Protestants from Catholic areas, has mostly disappeared.

The thought of running from a place, with no more than what we stand up in, is not something that would occur to us. Yet Herod’s men are alive and well, who else would yesterday have burned a church in Kenya, with women and children inside, and danced in front of the television cameras waving machetes and sickles?

Meeting Christians from Rwanda and Burundi, it is hard to comprehend the fear in which they lived during the genocide of the 1990s; hard to imagine how clergy got caught up in the slaughter of members of the other community; hard to imagine how the world could have looked on through the eyes of the United Nations soldiers, who stood and watched the nightmare unfold.

We might not notice Christmas cards of the flight into Egypt. Do we ever notice the Marys and Josephs living in our own city?