It was thirty-three years ago today that we raised the money for a new football strip.

A sponsored walk – they were a new thing in 1975 – or maybe we were just behind the times. Fifty or sixty of us walked from our school deep within Dartmoor National Park to a place called Holcombe Down outside of Teignmouth. It was advertised as a twenty mile walk, I think it may have been only seventeen, but the extra three miles made it sound more impressive and elicited more money from those who sponsored by the mile.

We were all given sponsor cards to post to our families at home and they collected money and posted the cards back. We had the money before the walk had ever happened! I had £6 on my sponsor card, equivalent at that time to about two dozen pints of beer; one boy had £41, which matched a week’s wages for most people.

There was much debate about the colour of the new strip. Three options were proposed and we had to vote: a preponderance of Midlanders meant that we ended up with the orange of Wolves, not that you could tell from the team photograph on the first day the new colours were worn. 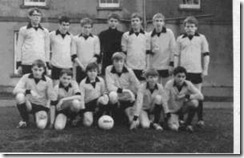 The team selection that day was very odd, much of it seemed to depend on whether or not you were liked by the team captain – who played in goal. Unlikely people got a run out that day, including the undersized, pale and skinny kid second from the left in the front row who is a middle aged cleric in Ireland now and who wishes he could remember his lectures as clearly as he remembers every detail of 15th March 1975 and remembers the name of each person in that football team of those distant days.