Bible stories are read so often in church that people stop listening.  It is assumed that nothing more is to be heard, that nothing more can be learned. Maybe the problem arises from discontinuity, breaking the material up into chapters and verses, reading so much and then stopping until next Sunday, instead of reading it as you would any other story.

John the Baptist is killed by henchmen of the vicious thug Herod, the consequence of a drunken whim.  Many people without the slightest church connection will know the story; here is how it is told by Saint Matthew:

On Herod’s birthday the daughter of Herodias danced for them and pleased Herod so much that he promised with an oath to give her whatever she asked. Prompted by her mother, she said, “Give me here on a platter the head of John the Baptist.” The king was distressed, but because of his oaths and his dinner guests, he ordered that her request be granted and had John beheaded in the prison. His head was brought in on a platter and given to the girl, who carried it to her mother. John’s disciples came and took his body and buried it. 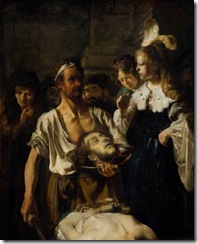 The story was frequently the stuff of art in centuries past, the Seventeen Century Dutch artist Carel Fabritius captured it with a grim realism, but what happens next?  What is the very next moment in the story?

Hand on heart, I wasn’t sure until re-reading it. Maybe Matthew returned to the main theme, to the story of Jesus?  But he didn’t

John’s friends bury his body, “Then they went and told Jesus”.  This violent death is not something that goes unremarked; it is not allowed to slip into the narrative as just some unfortunate aside.  When Jesus hears of the political killing of his cousin, he does not simply see it as the outworking of the overall plot.  He takes it badly, as badly as any of us might, “When Jesus heard what had happened, he withdrew by boat privately to a solitary place”.

I wondered about that, all he wants in this moment of grief is some peace and quiet, some time to be alone.

I wondered about the way we cope with death here in Ireland; we fill the house, we crowd in, we surround people.  What happens if, like Jesus, they just want to have some private time, to be solitary just for a while?  I know I am the worst of offenders: so anxious to have everything orderly, I sometimes fail to give people the space they need.

If Jesus needs time to be private, to be alone, perhaps we need to look at the way we do funerals.