I was once in the same tutorial group as Justin Webb, the BBC’s North America editor, whose blog appears on the BBC homepage every day as the United States’ presidential election draws nearer.  Were in not for Justin’s blog, my interest in the election would be slight.

Ireland is utterly fixated on the battle between Obama and McCain, it tops the news in the mornings; even the primary battles between Obama and Clinton relegated domestic news stories to lower places in the headlines.  Not only is there a fixation, there is a complete bias towards the Democrats, as though a Democrat victory was vital to the ordinary Dubliner.

It’s odd, what difference will it make?

The laws here are mostly now shaped by the European Union, where Ireland is one of twenty-five; scant attention is ever paid to the election results in most of those countries.  How many Irish people even knew the Austrians had held a general election?

The most significant trading bloc in the world used to be the Quad – the United States, Canada, the European Union and Japan.   Two Quad members have elections in the coming weeks; there is no awareness at all of the poll taking place north of the 49th Parallel on 14th October.  The Quad’s dominance is now challenged by China, India and Brazil? How many can name the premiers of each?

Meetings of the G8 provide a forum for the governments of Canada, France, Germany, Italy, Japan, Russia, the United Kingdom, the United States and the European Union (the EU presence being a sort of honorary place, they cannot host or chair meetings), who is representing Ireland at such gatherings?  Might their role not be more important than the US presidential campaign in Michigan?

The dominant military alliance in the world is NATO, of which Ireland is not a member, has anyone any idea what their policies and objectives are at the moment?  What is the current attitude to protecting former Soviet republics against Russian dominance? Now the Georgia crisis is over, there is not a mention.

Historical connections with the United States created huge emotional ties – it was the land of refuge in the 19th Century and the land of opportunity in the 20th, but the realities have changed.  The US National Debt Clock, pictured by the BBC has now run out of digits. P 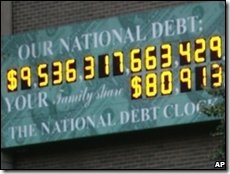 ut up in 1989 when the national debt was $2.7 trillion dollars, the clock has now passed the $10 trillion dollar point and is going to have extra digits added to allow it to record quadrillions.

Against that background, an obsessive concern with the details of the campaign is beginning to look as odd as the Queen of England being the head of state of remote countries – a nice piece of historical interest, but not as relevant as things going on considerably closer to home.

In the meantime, the furious reactions to Justin Webb’s comments make entertaining reading over a mug of tea.