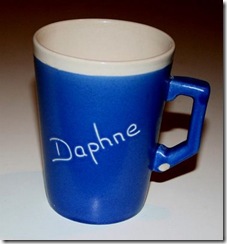 An apology at the outset for the theft of a photograph from the blog of my friend Helen in Australia.

The photograph gave me, perhaps, a brief glimpse of what it might be like to struggle with dementia.  The picture seemed to stir memories, but they were memories that were disjointed; that followed no sequence. Not even memories; more images: an image of a blue and white jug on my grandmother’s table; an image of blue mugs outside a shop in a seaside town.

The images would not sharpen; nor would they connect; why were memories triggered by the picture? 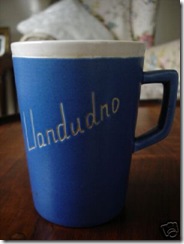 Google provided the answer.  With search terms no more precise than “blue and white pottery mug”, the links formed a chain that led to Devon Blue Ware, pottery from the county where we spent our holidays each year; pottery that graced not only Devon, but many other seaside towns in the 1950s and 1960s.

But what if there had not been the Google option?  The images would have remained unconnected; things at the edge of consciousness that would not take on any meaning.  No matter how hard I had concentrated, I would not have found the explanation.

Visiting people with dementia on a regular basis, it seems to be the connections that become lost, the chains become unlinked.  A lady would describe school days, but would become frustrated when what it was she had set out to say seemed to drift out of reach.  She would laugh and wave her hand.  Not everyone is able to cope in such a way; sometimes there are tears, sometimes there is anger.  “There is a terrible rippling in my head”, said one lady, “and I cannot cope with it.”  There is a sense of helplessness in sitting and watching, unable to do anything to change anything.

It is disturbing because yesterday’s “Financial Times”, reporting on the damage being caused by alcohol, suggested that one third of us may have to cope with dementia:

Britain may pay for its current drinking culture with a “silent epidemic” of dementia, psychiatrists warn on Saturday.

Young and middle-aged people who binge drink are often unaware that excessive alcohol consumption in-creases the long-term risk of dementia, and alcohol is “largely overlooked” as a factor, even by professionals, says an editorial in the British Journal of Psychiatry.

The authors, London-based psychiatrists Susham Gupta and James Warner, point out that alcohol is already believed to contribute to at least 10 per cent of all dementia – yet this reflects past levels of drinking, which are considerably lower than today’s.

Consumption per head of population has roughly doubled over the past 40 years, from the equivalent of under six litres of pure alcohol a year in the early 1960s to more than 11.5 litres annually now. If the trend continues, people in Britain will be consuming more alcohol than any other population in Europe within a decade.

When people drink a lot, any benefits of alcohol are reversed, leading to high blood pressure, raised levels of harmful blood fats and brain damage, say the authors.

“Given the neurotoxic effects of alcohol and the inexorable increase in per capita consumption, future generations may see a disproportionate increase in alcohol-related dementia,” they say. “This could be compounded by the effects of increasing use of recreational drugs such as ecstasy, whose long-term effects on cognition are still uncertain.”

Most recent research has focused on the beneficial effect of small amounts of alcohol but neglected the harm done to the brain by heavy drinking, they contend.

The Alzheimer’s Society supports their message. Susanne Sorensen, head of research, said: “One in three people over 65 will die with dementia. We desperately need new research into the long-term effects of all types of alcohol consumption – from people who drink more than a few glasses of wine each night to binge drinkers.”

Imagine having memory after memory and image after image and never being able to connect them, ever.  Compared to cancer and heart disease, how much do we spend on research into dementia?