A week on from Remembrance Sunday, a much more low key commemoration takes place in the Wicklow Mountains; each year a ceremony of remembrance takes place at the German war Cemetery at Glencree.

The cemetery contains the mortal remains of 134 Germans who died during the First and Second World Wars.    The Wikipedia entry for Glencree tells a story as sad as that of any war cemetery:

Glencree Deutsche Kriegsgraberstatte was dedicated on 9 July 1961. There are 134 graves. Most are Luftwaffe (air force) or Kriegsmarine (navy) personnel. 53 are identified, 28 are unknown. Six deaths date from World War I, they were prisoners of war held by the British. Forty six German civilian detainees were being shipped from England to Canada for internment when their ship, Arandora Star was torpedoed by a German U-boat off Tory Island in July 1940. Dr Hermann Görtz, a German spy is also here. He committed suicide as he feared he would be handed over to the allies at the end of the war. It is administered by the German War Graves Commission (Volksbund Deutsche Kriegsgräberfürsorge) 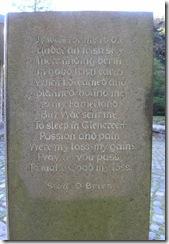 It was for me to die
Under an Irish sky
There finding berth
In good Irish earth
What I dreamed and planned
bound me to my Fatherland
But War sent me
To sleep in Glencree +
Passion and pain
Were my loss my gain:
Pray as you pass

Yet a place of sadness became also a place of hope and the beginning of a new future.  Glencree was the home from 1945-1950 of many of the orphans brought from the ruins of post-war Europe by Operation Shamrock, an initiative of the Irish Red Cross and the French Sisters of Charity.

Dianne Ascroft’s novel, “Hitler and Mars Bars“, published earlier this year, is inspired by the experiences of those children.  The novel, based loosely on historic events,  is “the moving story, of a German boy’s journey through loss, loneliness, fear, uncertainty, love and hope in war-torn Germany and post-war rural Ireland”.

Glencree’s German connection is, however, about much more than the past.  Perhaps Irelands’ present arose from those days sixty years ago.  In 1999, Cathy Molohan wrote in the English newspaper The Independent of the Booming benefits of `Operation Shamrock’

After years of low economic growth rates, high unemployment and mass emigration, Ireland is today associated with a booming economy – the so-called “Celtic Tiger”. Twenty-six years after joining the European Economic Community, Ireland has started to reap the benefits of being enthusiastically pro-European. European subsidies, financed by wealthier member states such as Germany, have provided the funds necessary to develop the country’s infrastructure, while the open markets of Europe have drawn numerous foreign companies to Ireland’s shores. Young people, instead of emigrating in their masses as they did in the 1980s, are staying at home or indeed returning to Ireland from America, England and Germany to take up highly paid positions.

The contrast with the Ireland of the 1940s and 1950s, plagued by unemployment and immigration, isolated in foreign policy due to the country’s neutrality in the Second World War, could not be greater. It was, however, in this post-war period when Ireland took the first tentative steps towards a new Europe. In the years immediately following the war, Ireland played a major role in offering help to the war-torn countries of Europe, and, due to historic cultural and religious links, it was to Germany that much of this assistance was directed.

German children were brought to Ireland to recover from the traumas of the war under the programme christened “Operation Shamrock”, financial and material donations were made through organisations such as Caritas and the Red Cross, and German-Irish societies were set up to re-establish important cultural links in the fields of literature and language. From these initial contacts there developed the first post-war trade links with Germany – Irish politicians at the time were determined to increase the importance of the European market in order to move away from economic dependence on Britain. During the 1950s Germany became the chief mainland European trading partner for Ireland.

Acknowledging the sadness of German remembrance today; Ireland might also be thankful for great German generosity.