An Anglican bishop once complained about donations received by his diocese. “Do not send us money, if you wish to tell us what to do with it. Let us decide how we shall spend the money, otherwise you are saying that you do not trust us”.

Do you know, bishop? You could be right.

And my distrust stems not from anything I have read, but from what I have been told by people whom I would trust.

There was the bishop who moved into his diocese and decided that the agricultural development programme in his diocese, which was benefiting tens of thousands of people, would be much better run by someone else. He sacked Sam, who has been a guest of mine in two different houses, and who had built the project up from nothing, and he put in someone who had no qualifications whatsoever for the job, except one – he was the bishop’s brother. It wouldn’t inspire trust, would it?

Or what about the bishop who was appointed and moved his cathedral and his diocesan office away from the town which was at the centre of the vast rural area and put them in a remote village? The village was on the road to nowhere; it wasn’t even on a road, it was on a track. What criteria had prompted such a move? None, except that this was the bishop’s home village. Do you know what else he did? He gave the jobs that went with the diocesan functions to friends of his. He even ordained someone without any theological training so that the person might take a church post. Sounds medieval, doesn’t it? It was ten years ago. How do I know? Because I went there.

Or what about the experience of John, who has stayed with me here in Dublin: he worked in a remote and poor area building up a good rural development and agricultural project. He built it up from nothing; I know, because when he stayed with me it was still on his various pieces of paper. He got a grant, not a big one, €9,000, to expand the project. John’s misfortune was to be accountable to a bishop, so, when the money came through, the bishop took the entire sum and took himself and his family to the United States for a visit. John had to start again, by himself, but he will get there.

But do you know something? No matter how bad the bishops are; they are more accountable than the politicians. Sam and John could tell their stories. the agencies supporting them could divert their funds. The bishops concerned could be avoided in any further grant making. 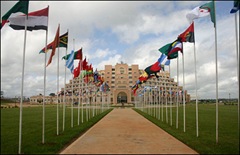 If you want a really depressing story. Then go to the BBC’s gallery of photographs from the new capital of Cote d’Ivoire which was posted on the BBC website today. Why does Cote d’Ivoire need a new capital? It doesn’t. Why was the capital moved to such a remote location? Because it was the president’s home. How much has it cost? Who knows? Cote d’Ivoire ranks as 166th out of 177 countries in the world.