Thursday was imbued with a November greyness.  Slipping a book into the briefcase with the intention of passing half an hour sat in Saint Stephen’s Green before going to an engagement in Earlsfort Terrace at 5.00, the facts that it would be dark by 4.30, and the Green would be very firmly closed, were forgotten.  Reaching the top of Grafton Street, the options for passing the time were limited.

Perhaps go back to Brown Thomas and look at their Christmas window displays?  People used to talk about being brought to Grafton Street when they were young to look in the shop windows at Christmas time; there would be little now to capture a child’s imagination.

Uninclined to head back into the crowds and the Green, beyond the Fusiliers’ Arch, in darkness, Elvery’s Rugby shop was one of the few nearby options.

The shop was busy, perhaps purchases ahead of today’s international against Argentina, the team that secured Ireland’s elimination from the last world cup.  Munster colours were in strong evidence, as well they might be after the province almost beating the All Blacks, along with the green of the Irish national side, the blue of Leinster and the white of Ulster; there were even a good number of Connacht shirts.  The search for a colour to lift the November greyness seemed, though, to be in vain.

An assistant came over, probably worried at a middle aged cleric wandering aimlessly in her shop.  “Can I help you?”

“A Bayonne shirt?  I have seen Biarritz colours in here and wondered whether you might have one for Aviron Bayonnais”.

“They are over at the door.  At least, they were.  I’m not sure if there are any left”.

She led the way towards a rack of shirts that was like an album of holiday photographs; the Catalan colours of Perpignan, the black of Dax; the red and white of Biarritz Olympique; and, on the front left, the colours of an August day, the sky blue and white of Bayonne.

The assistant looked quizzical.  “This is for you?”

“Do you not want to try it on?  We have changing rooms at the back.”

“Are you sure?  Well, could you come over to the desk to pay?”  The shirt was neatly folded and placed into a bag.

“I’m glad I saw a Biarritz shirt here, otherwise I wouldn’t have thought to look for a Bayonne one”.

Leaving the shop, the evening seemed not so bleak.  The Shelbourne Hotel shone brightly and the cast iron street lamps looked like something from Dickens.  Homeward bound office workers had a jauntiness in their step as I passed Loreto on the Green.  The National Concert Hall had a magnetic feel about it, but there would be no attending concerts that evening.

Getting home, the bag was unwrapped as swiftly as a parcel in the first light of Christmas morning.  Only one cleric in the entire world has the colours of summer pinned up in his study. 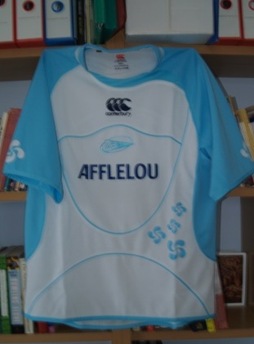