Relying on the Internet for such information, it is not hard to believe the story of the man who knew only one sort of tree – it was called ‘tree’.  Having a list of trees that runs to oak, not-oak, silver birch and Christmas, it is not hard to imagine someone having as little knowledge as I have.

This is despite the best efforts of Miss Everitt, who took the primary school class for Nature every week, trying to teach not only the sorts of trees and flowers, but also their components – sepals and stamens and all that sort of stuff.  The list of recognizable flowers is longer than that of trees: daffodils, tulips, primroses, cowslips, things that might be bluebells, the red yokes in the corner, and lily things that give me hay fever on Easter morning.

It must have been hard to have got through an entire education in rural England without developing even a slight awareness of the countryside around.

An abiding memory of two summers working on a nursery, along with a friend, is being asked by the foreman to clear a bed close to the greenhouses in which he was working.  A grand job was done and an hour later there was not so much as the smallest of weeds left in the bed.  The foreman, on his return, turned a shade often described as puce and asked us in Anglo-Saxon English where his astilbes were.  We didn’t know what an astilbe looked like, so couldn’t answer his question.  A frantic search through the rubbish heap ensued, as he, along with us scrambled to find the unearthed plants before the manager came by on his morning rounds.

Not being any lazier than the next person when it came to studying at school, what happened that an entire component of education seemed to disappear? Historical stuff like the day of the death of Marie Antoinette and the youngest person in the Royal Navy to be awarded the Victoria Cross stuck in the brain (16th October 1793 and Jack Cornwell); English was not bad, except for the handwriting classes; arithmetic was manageable, even the long division; but ask what was the tree that grew in the hedge beside the school field, and there would be bewilderment.

Perhaps it was just dislike of the everyday familiar things – like Irish people who studied the first national language for fourteen years and left school with not much more than a handful of words  and an aversion to Peig Sayers.  Stories of life on the Blasket Islands had not much appeal for many people in modern Ireland, and maybe stuff about trees and flowers had not much appeal in a rapidly changing England.

Sometimes, an evening class on all the things one never learned would sound an attractive proposition.

As for the astilbes, they still look like weeds. 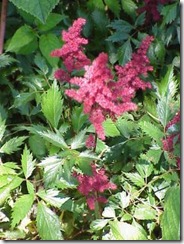