He lowered his newspaper and turned and watched us as we pulled into the car park. Closely cut silver, grey hair, a good quarter inch clear of his ears; a neat grey suit, white shirt, plain tie: former soldier or a career in special branch? Satisfied with whatever he had seen, he returned to his newspaper. There was no need to notice the ‘CD’ plate on the back of his grey Mercedes; this man made it clear to anyone present that he was there and that he had noted their presence. Walking from the car park, thoughts arose as to whether his jackets would be cut in such a way that the holster under his left arm did not spoil the line of his suit, or in peaceful times would there be no .357 Revolver to carry?

There was no pretence at being undercover, even the car appeared armoured, at least against gunshots, the thickened glass giving the windows a deeper hue than normal.

The man used his appearance, his car, and his presence to convey a clear message, ‘Don’t mess with me’.

Image can convey many messages.

Two weeks earlier, two academics had spoken about poetry at a seminar. The woman was very large, with unstyled greying brown hair that hung at waist length, her baggy black tee shirt and matching trousers added nothing to her appearance. The man wore an open necked shirt and pale trousers with a tweed sports jacket, his mane of grey hair was brushed straight back from his forehead; at the side it was tucked behind his ears but strands at the back of his head pointed in random directions.

A clear message: “we are not worried about how we appear, what is important is what we say”. What they said was excellent.

When it comes to the church, which option is chosen?

Maybe, it would be argued that the poets represent the path the church should follow.

Look at John the Baptist, no-one could be more wild and unkempt. Yet John sought to convey a message with his appearance; his was the role of the prophet of olden times and he acted the role with deliberateness. His asceticism is not a casual and uncaring matter.

Of course, the concern should be with what is said and not what we look like, but people judge by impressions, to be unkempt and unbothered may suggest to someone met that neither are we serious.

Saint Paul would be anxious about impressions made, “We are therefore Christ’s ambassadors, as though God were making his appeal through us”, he says to the Christians at Corinth. Maybe people should not get worked up about appearances, but the fact is they do, the whole of the fashion and beauty industries are built on a human concern with appearances, and because how someone looks is important to some people, Paul would have urged church people to be mindful of these things. “I have become all things to all men so that by all possible means I might save some”, he says. All things in our own time means being neat, tidy and presentable. 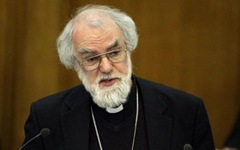