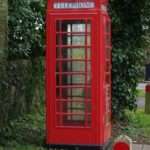 Walking down the street in Maisons Laffitte in the summer, a sight familiar from childhood days caught the eye: how many times had the striking red of such a phone box caught the eye when crossing the village green?

Only when it was fifty yards behind did the thought arise, “What’s one of those doing here?” What was a British phone box doing on the street of a Parisian suburb? We had to walk back to investigate. The phone box had been presented to Maisons Laffitte by Newmarket, its twin town in England. It was a gift that had obviously been received with enthusiasm, for it occupied a place on the pavement where it would be visible to anyone passing through the town.

The phone box remains on the village green, but its like is becoming rare in many parts of England. This icon of Twentieth Century Britain will eventually become a collector’s piece; appearing only in private gardens or in museums.

Perhaps it would be a pity for it to disappear altogether, for it represented more than a very individual piece of design, though the various essays in glass and steel have never had one fraction of it character. The red phone box represented liberty for countless young people.

These were times when phones at home were a matter of necessity or luxury, guarded by bill payers fearful of hefty demands from the Post Office (in 1982 the Post Office thought that a three minute long distance phone call for 20 pence was a bargain – tell people now that paying the equivalent of £10 an hour for a phone call to somewhere else in the country was good value and they would laugh at you). Calls from the phone box were even more expensive than those from a private phone, but there would be no bills to explain. Even the payment options had an English eccentricity about them. The phone box on the green had two slots, one for 2 pence pieces and the other for ten pence coins. The former was important, no-one would want to push in 10p at the beeps only to find the person they wanted was not there, but why a fivefold difference between the two coins?

Phone boxes in different places became associated with different memories, sometimes happy, sometimes sad. They were cold and harsh places when waiting for calls that never came; their doors as heavy as the mood that hang over one’s head. The shelf on which the directories could be placed became a leaning post when the conversation became too much to take unsupported. The concrete floor was as cold as the words that were sometimes exchanged.

Yet, whatever the memories, the red phone boxes were about freedom of expression. There would be no-one listening in on the conversation; no-one to know what number had been dialled; no-one able to say for sure who it was that had been called.

The phone box could not for a moment compare with the potential of the mobile that lies on my desk, but no mobile will ever have the resonances of that distinctive red feature of countless towns and villages. 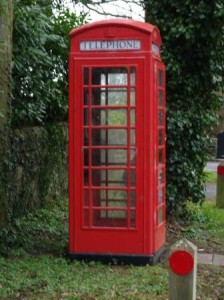