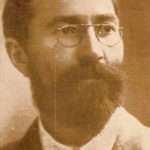 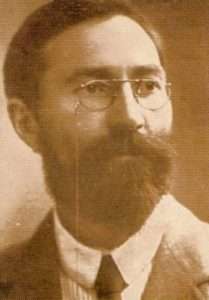 Bidden to sort papers lying in a pile for months, things dating from the spring and before were mostly tossed into a box bound for the recycling bin. But there were odd things to be kept, amongst them a bookmark issued in 2006. It commemorates the Irish pacifist and feminist Francis Sheehy-Skeffington. Attempting to stop looters during the Easter Rising in 1916, he was arrested by British soldiers at Portobello Bridge. Used as a hostage by the army, he and three others were summarily shot under the orders of a British officer. It was the most pointless of deaths.

The attempt by the British to cover up the murders was thwarted by Major Francis Fletcher Vane, who had been ordered to bury the bodies. Vane was to be dishonourably discharged from the army later that year for his part in the affair. Sheehy-Skeffington’s murderer pleaded insanity at a court martial and was sent to Broadmoor where a year and a half later he was deemed to be cured. He retired to Canada on an army pension.

The first hearing of the story of Sheehy-Skeffington prompted a sense of incredulity. Inquiring of a teenage daughter whether the facts related were accurate brought an emotional response. “They took Sheehy-Skeffington off the street for doing nothing at all and then they shot him. He had done nothing; he was a pacifist”.

The story of the gentle Sheehy-Skeffington, the friend of James Joyce, Oliver Saint John Gogarty and Tom Kettle; the man whose feminism included taking the name of his wife Hanna Sheehy and combining it with Skeffington, his family name; the lifelong pacifist who would take arms against no-one; did more to radicalise opinion in our house than any other story.

The madman responsible for the execution of Sheehy-Skeffington had many counterparts throughout the army. The bloody slaughter of the Western Front could only have been the enterprise of madmen. The stupid, senseless idiocy of those years is captured in the final moments of the television series Blackadder goes Forth. Twenty years on and none of the poignancy is lost.

(They start to go outside)

George: Oh no, sir — wouldn’t want to face a machine gun without this!

(outside, they all line up as the shelling stops)

Darling: Listen! Our guns have stopped.

George: Well, hurrah! The big knobs have gone round the table and yanked the iron out of the fire!

All but Edmund: Hurray!

Edmund: (loading his revolver) I’m afraid not. The guns have stopped because we’re about to attack. Not even our generals are mad enough to shell their own men. They think it’s far more sporting to let the Germans do it.

Edmund: I’m afraid so, unless I think of something very quickly.

Baldrick: Ooh, there’s a nasty splinter on that ladder, sir! A bloke could hurt himself on that.

(everyone puts a foot forward)

Baldrick: I have a plan, sir.

Edmund: Really, Baldrick? A cunning and subtle one?

Edmund: As cunning as a fox who’s just been appointed Professor of cunning at Oxford University?

Voice: On the signal, company will advance!

Edmund: Well, I’m afraid it’ll have to wait. Whatever it was, I’m sure it was better than my plan to get out of this by pretending to be mad. I mean, who would have noticed another madman round here?

Sending hundreds of thousands to die in mud and excrement left an elite that did not baulk at the murder of a gentle Irish intellectual. Sheehy-Skeffington’s death shows what happens when the madmen are allowed to take control.