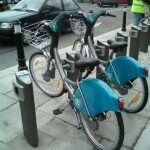 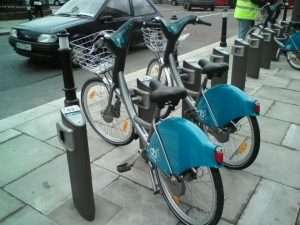 The old black bicycle was an icon of the old Ireland. Whether on city streets or county roads, the old bike was a faithful friend to generations of Irish men and women. It took people on journeys to education and work, to sporting fixtures and musical entertainment, to religious ceremonies and romantic assignations. Church walls, shop windows, field gates, school sheds, sports ground fences, the bicycles would be seen leaning across the length and breadth of the country.

But if the bicycle widened horizons, it also set limits. Bridie in William Trevor’s Ballroom of Romance lives in a world circumscribed by how far she can pedal.

“As well as Mass on Sundays and her weekly visits to a wayside dance­hall Bridie went shopping once every month, cycling to the town early on a Friday afternoon. She bought things for herself, material for a dress, knitting wool, stockings, a newspaper, and paper-backed Wild West novels for her father. She talked in the shops to some of the girls she’d been at school with, girls who had married shop-assistants or shop-keepers, or had become assistants themselves. Most of them had families of their own by now. ‘You’re lucky to be peaceful in the hills,’ they said to Bridie, ‘instead of stuck in a hole like this.’ They had a tired look, most of them, from pregnancies and their efforts to organize and control their large families.

As she cycled back to the hills on a Friday Bridie often felt that they truly envied her her life, and she found it surprising that they should do so. If it hadn’t been for her father she’d have wanted to work in the town also, in the tinned meat factory maybe, or in a shop. The town had a cinema called the Electric, and a fish-and-chip shop where people met at night, eating chips out of newspaper on the pavement outside. In the evenings, sitting in the farmhouse with her father, she often thought about the town, imagining the shop-windows lit up to display their goods and the sweet­shops still open so that people could purchase chocolates or fruit to take with them to the Electric cinema. But the town was eleven miles away, which was too far to cycle, there and back, for an evening’s entertainment”.

For years after the arrival of the motor car, the bicycle remained the main means of transport for many people; in many cases, a car was simply beyond their pocket.

If the bicycle is an icon of the old Ireland, perhaps the bicycle is also an icon of the post-Tiger Ireland. The new Dublin bicycles demand both access to the Internet, for registration and for updates on availability, and access to a credit card, for paying the charges, both things beyond the imagination of Bridie who pedalled along country roads. While the old bicycle was an icon of austerity; the new bicycle is perhaps an icon of frugality. Perhaps in fifty years time the Dublin bikes will feature in period stories of life at the end of the first decade of the century.