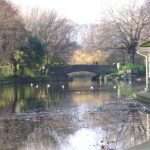 The sun was not so much wintery as washed out; a pale blob in the sky, it hardly managed to clear the roof of the Department of Foreign Affairs, where the tricolour on the roof seemed to find enough of a breeze to have some life about it.

Daniel O’Connell, standing at the entrance to the Green, and the Famine sculpture behind him, were reminders that the city around had more often been a place of unhappiness than it had been one of tranquility.

Armed with a tuna baguette and a bar of chocolate, the mostly deserted park benches offered opportunity to sit and escape. There were times in the past when it seemed odd that people would sit by themselves on park benches and just stare into the middle distance, what did they think about for all those hours? The answer was now clear, nothing.

Across the pond a mother pushed her little boy in one of those three wheeled buggies that are now popular. Stopping near the water’s edge, she handed bread to the boy who threw pieces of it around him. The birds began to swarm: mallard ducks swam across the water, pigeons in their dozens came swooping in, even a pair of swans swam serenely to the scene to investigate the possibilities. The effort for all but a few of them was pointless, the chunks of bed were quickly gone.

There seemed a lesson there about economics, maybe about not chasing markets that were already overcrowded, though teaching theories of supply and demand to grey pigeons would probably not be very fruitful. Maybe there was a lesson about life itself, about going one’s own way and making one’s own opportunities.

A few gulls drifted aimlessly in the pond, apparently oblivious to the furious activity of the pigeons. Eventually one hopped out of the water and walked towards the bench. A large herring gull, who seemed as big as two of the mallard, he came and stood five yards from the bench and just stared fixedly.

Mind games, huh? Two can play at that. The baguette was very good, tuna and cranberries and salad, its taste unaffected by the presence of a large gull at five strides’ distance. Finally, there was just bread left at the end. The bird looked expectantly and leapt with delight as the two hunks of bread landed on the grass. Both were gone in seconds, not even a crumb left for the pigeons.

The herring gull seemed vindication of the thought about not following the crowd, he had gone his own way and made his own chances. The basis of the gull’s policy became clear, he simply chased away any other bird that trespassed on his length of the water’s edge. This gull was not an entrepreneur finding new sources of income, this gull was a monopolist, he was a bully.

Perhaps one could devise an entire economic model based on pigeons and gulls, after all, it would be no more silly and probably far less calamitous than the economic model that has bankrupted the country.

Nearly two o’clock, time to leave the bench and re-enter a world filled with pigeons and gulls.