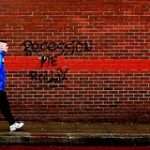 Irish people seem to have an infinite capacity to put up with appalling treatment.

While working people struggle with swingeing pay cuts, or losing their jobs altogether, there is hardly a murmur when the senior civil servants use Christmas as a cover to ensure that their own pain is reduced.

Hardly a voice is raised at flat rate cuts in benefits, which always hit poorest people harder – the €16 a month cut in child benefit is a far more serious matter for someone struggling to make ends meet than it is for the golden sandaled ladies who lunch.  No-one seems to do anything to stop the iniquitous “green” taxes: bin charges that are as much for a pensioner as a millionaire, and “carbon taxes” charged at a flat rate per litre, taking no account of people’s ability to pay and taking no account of the complete absence of any coherent public transport system in most of the country.  There is almost complete silence about plans for water charges which will hurt poor people and hardly be noticed by the rich.

There is no more than a ripple of complaint at the fact that billions, that could have been spent on caring for sick people, have been spent on propping up the bankrupt Anglo Irish Bank.  No-one seems prepared to do anything to actually stop the culture of corporate greed; no-one is brought to book for the arrogance that has brought the country to its knees.

Where working people would have been sent to prison for dishonesty, through all the Tribunals and Inquiries, hardly a soul has spent time in prison.  Where judges would have contemptuously dismissed fantastic and absurd stories from an ordinary man, from the lips of senior politicians they seem acceptable.

What was most depressing was not the property market collapse, or the banking scandals, or the political machinations, or the ‘in your face’ selfishness of the wealthy and the powerful; what was most depressing was that people just seemed to take whatever slaps in the face came along.  Even the deal between the government and the religious orders, limiting the orders’ liability to hardly more than 10% of the compensation bill arising from the hideous crimes of some of their members, just seems to have been grudgingly accepted.

Personally, the single most encouraging image to come out of it all is Andy Sheridan’s photograph taken in Dublin’s Winetavern Street last year.  The graffiti was only briefly on the wall, and the juxtaposition of it with the defiant young man was a single moment in time. 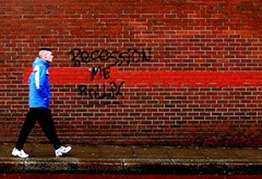 What does the graffiti declare?  Maybe that for the poor the boom years made little difference, everything became unaffordable.  Now that the boom is past, the recession is used as the excuse to attack poor people.  Maybe it’s a sign that the defiant spirit of the Dublin people that carried them though every bad time in the past is still there; perhaps they do not protest, but neither are they cowed.

Make a political statement about the attacks on poor people and buy a print from Andy Sheridan, whom I met for the first time this afternoon, at a LUAS station in Dublin when I went to collect my copy.  The print is a limited edition and Andy Sheridan’s contact details are on his Flickr pages.