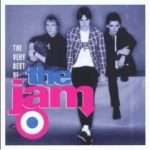 Colm is coming to visit; we go back twenty years. There were times when he probably wished he had not encountered me, like the time playing The Jam on a religious programme caused a row at a radio station.

I used to contribute to a weekly religious affairs programme in the North that went out at 6.30 pm on a Monday. It was never likely to be a ratings-topping endeavour, but the programme went out at a time when the station reckoned they would have had about 10,000 listeners – so for someone used to a few dozen in church, it was a very worthwhile activity.

Week by week, along with three other contributors, I would submit items, mostly interviews. Colm was the producer/presenter and would intersperse voice material with music, mostly of the sacred variety, but occasionally slipping in pop stuff if he felt it appropriate.

There came a point in 1992 when Colm was going to South Africa to work on programmes for a television company. There were the four contributors left to put the programme together and he made the very bad choice of asking me to produce and present on the three Mondays that he was away. This was not a wise decision, the production standards slipped drastically, I could never quite master the skills needed to edit interviews on a reel to reel editing machine; more seriously, the content caused ripples.

An interview about racism and racist attacks had been submitted for inclusion in the programme. It was a grim subject and I felt that following it with some benign piece of Christian music was not appropriate. I decided that The Jam’s “Down in the Tube Station at Midnight” captured the subject well. The programme was pre-recorded at four o’clock on a Monday afternoon and the engineer who was recording asked me if I was sure about the music.

We came to the link to the music and I said, “Now, to go with a violent subject, here’s a song with violent words” and on came The Jam,

The distant echo –
of faraway voices boarding faraway trains
To take them home to
the ones that they love and who love them forever
The glazed, dirty steps – repeat my own and reflect my thoughts
Cold and uninviting, partially naked
Except for toffee wrappers and this morning’s papers
Mr. Jones got run down
Headlines of death and sorrow – they tell of tomorrow
Madmen on the rampage
And I’m down in the tube station at midnight

I fumble for change – and pull out the Queen
Smiling, beguiling
I put in the money and pull out a plum
Behind me
Whispers in the shadows – gruff blazing voices
Hating, waiting
“Hey boy” they shout – “have you got any money?”
And I said – “I’ve a little money and a take away curry,
I’m on my way home to my wife.
She’ll be lining up the cutlery,
You know she’s expecting me
Polishing the glasses and pulling out the cork”
And I’m down in the tube station at midnight

I first felt a fist, and then a kick
I could now smell their breath
They smelt of pubs and Wormwood Scrubs
And too many right wing meetings
My life swam around me
It took a look and drowned me in its own existence
The smell of brown leather
It blended in with the weather
It filled my eyes, ears, nose and mouth
It blocked all my senses
Couldn’t see, hear, speak any longer
And I’m down in the tube station at midnight
I said I was down in the tube station at midnight

The next week I saw the engineer, “The Head of Programmes says that record is banned from this station.”

I never found out whom I had offended. On his return, Colm was politely sold that “production values had slipped during his absence”.