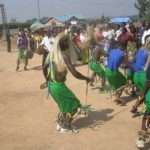 The charge came though on the credit card. tickets for Dublin to London, London to Nairobi, and Nairobi to Kigali, for less than the price of a package holiday to a Spanish Costa.

The trip is for work, to visit projects and to talk about developing partnerships (and is paid for personally), but Africa leaves bolder images and more vivid memories than any imaginable holidays. It is the worst and the best of places, and mostly the television screens are filled with all that is the worse.

What if Europe were to be judged on the drab housing estates on the edge of cities, on the level of urban crime, on the loneliness of people, on tensions in communities, on drug problems, on the hundred and one problems that are the stuff of documentaries? People would phone in to complain that this was an unfair representation.

Africa’s problems are hundreds of times greater, but to suggest the whole continent is a place of war and famine and corruption and ethnic tension and killings by witch doctors, is to misrepresent a place of unimaginable vastness and immeasurable diversity.

Rwanda has been the worst of places. The perpetrators of the 1994 genocide were alleged to have been more thoroughly evil than the Nazis in their crimes against the human race. The thought of the whole scale slaughter of hundreds of thousands of lives by people armed with machetes is beyond rational comprehension. Yet sixteen years on, the country is vibrant. The American evangelical leader, Rick Warren has described it as the world’s first ‘purpose driven nation’. Spending time there last summer, the Government was launching a set of standards to which everyone should aspire; they included punctuality, honouring commitments and avoiding corruption.

But governments are incidental. Few people visiting Ireland would have much idea of Irish politics, few could name the parties or the politicians; it is the people who count. The Rwandan people have an energy and enthusiasm that is almost intimidating to reserved and rational Europeans. Music and dance seemed the stuff of everyday life; the costumes came out for special occasions, but at every opportune moment and even in some unexpected ones, there were songs that were sung.

Of course, I might just have ignored the invitation to visit and sent the €648.99 cost of the fares to the partners in Rwanda, that would have been a more rational thing to do. Perhaps being a partner, though, means respecting the culture of people who value friendship, contact and conversation. Driving an old Nissan Almera, that this week has acquired two more dents, instead of a more typical clergyman’s car, perhaps I can afford the cash to be both rational and respectful.