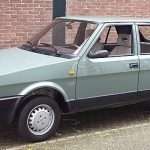 “Carlow is an easy drive. We’ll be there in no time”.

It was a warm, sunny June afternoon in 1985 and we sat on after our Sunday lunch. Carlow looked further on the map than our host’s manner suggested, but he knew the roads.

“Right, follow me”. A gentle, softly spoken, country clergyman, he stepped into his Fiat Ritmo, which seemed to be the standard clerical car at the time and moved off like something at Daytona.

“Perhaps we’ll reach the main road soon and it will be easier to keep up”.

There wasn’t to be a main road; he drove in the straightest line permitted by the network of country roads. Sometimes he would wave his arm from the driver’s window to indicate a left or a right turn coming up; throwing the arm wildly above the roof if we were heading left. Irish roads twenty-five years ago were not always what they might be and at one point he literally disappeared in a cloud of dust. The national speed limit in those days was around 55 mph, a speed he seemed to regard as something one should average.

We reached Carlow in time, still battered from the journey. “We had not expected to travel at such speed”.

He looked quizzically, “What speed?”

There had been a joke in college days that the fastest thing on Irish roads was a Church of Ireland Rector on a Sunday morning; racing between ditches and over potholes to take services in scattered country churches. A classmate’s father took five services in five different churches each and every Sunday morning; local people presumably knew to avoid the road if the canon was due to be passing by.

Plain logistics are probably the biggest problem facing most country clergy; bi-location skills come with the training, it is tri- and quad-location that is a little more tricky.

Irish people have a very deep sense of place, a very strong identity with the community in which they live, and, just as it is important to understand cultures overseas in order to do effective mission, so it is important to understand the culture at home. If the church is to have a meaningful presence, there needs to be worship each Sunday at a time that is attractive to those who might attend. Not only that, it is important to provide worship that is rooted in the traditional culture of the communities. No-one would go to Africa and say that communities used to singing and dancing should worship in the language of William Shakespeare, but sometimes the approach to our own communities has displayed a similar lack of sensitivity.

Trying to devise possible plans of worship for a group of six churches, scattered over a wide rural area, taxes the brain. The services themselves will not be the problem – it is the spaces in between that will be the challenge. Anyone still have a Fiat Ritmo?