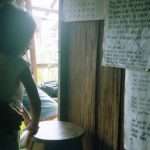 There are sometimes days so odd that in retrospect they did not happen.  The mind rationalises; things were not as they are remembered or they did not take place at all.

In the memory the place was reached by flying to Manila, then flying to Zamboanga, and then getting a jeep to the town, a journey of maybe five hours.  The next day an early start for a motor cycle ride into the mountains to visit miners.  The riders complain at the size of Europeans; usually the bikes will carry five, with us, only four.

My companion is on the other bike.  The shirt of the man behind him flaps in the wind, a large automatic handgun is attached to his belt.

We stop at a village for coffee.  My companion is followed everywhere by the man with the handgun.  He walks up to me in the market, “Ian, you’re being followed”.

“The man behind you on the motor bike.  He is following your every step”.

“I think we’re both being followed”.

There is an exchange of words. They are plain clothes police officers. They are to protect us for the day.

We are served coffee in a house.  A poster of the Irish boyband Westlife is on the wall.

“They are from Ireland”, we say.

Our host looks discomfited. “No, they are from America – like The Bee Gees”. To argue seems futile.

We are transferred to a jeep.  Further up the road there are soldiers.

The danger of kidnapping is taken with the utmost seriousness.  The terrorists in the area are of the Islamic fundamentalist variety.

Lunch is taken in a family home. Halfway through the meal, in an area where English is at best a third language, the realisation strikes that the words of ‘All things bright and beautiful’ are written on a strip of paper hanging on the wall.  The li 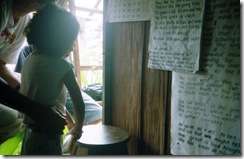 kelihood of the work of a 19th Irish hymnwriter being on a wall in this distant corner of the Philippines was so remote that verification was needed.  “Roger, what does it say on the wall?”

In the years since, the experience has thinned to the point where it must have been imaginary; perhaps the mountains evoked thoughts of Mrs Alexander.  Perhaps a local equivalent of the hymn had been written.  Perhaps there had been no lunch and no little girl had been made to read out the words.

But, nine years on, a photograph appears amidst the confusion; it did happen.

Tom Stoppard’s character Guildenstern reflects on the tendency to rationalise away the unexpected:

A man breaking his journey between one place and another at a third place of no name, character, population or significance, sees a unicorn cross his path and disappear. That in itself is startling, but there are precedents for mystical encounters of various kinds, or to be less extreme, a choice of persuasions to put it down to fancy; until – “My God,” says the second man, “I must be dreaming, I thought I saw a unicorn.” At which point, a dimension is added that makes the experience as alarming as it will ever be. A third witness, you understand, adds no further dimension but only spreads it thinner, and a fourth thinner still, and the more witnesses there are, the thinner it gets and the more reasonable it becomes until it is as thin as reality, the name we give to the common experience… “Look, look” recites the crowd. “A horse with an arrow in its forehead! It must have been mistaken for a deer.”

Seeing a unicorn would have rounded off the day nicely.