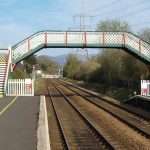 Browsing in a bookshop in Hay on Wye last summer, there was a magical moment.  There was a Bradshaw’s Directory for November 1939, a  paperback edition published at 2 shillings and sixpence.  Bradshaw’s had every timetable for every railway line in the country.

There were reprints of Bradshaw’s from 1910 and 1922, but they had no special feel about them. The 1939 edition was well thumbed; amongst its pages were slips of fading paper upon which had been written the times for various journeys. Holding the book, it was hard to imagine in whose hands that book may have lain. 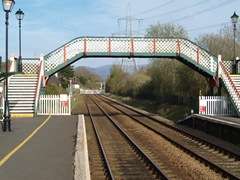 It was not just the fact that it was original and from a far bygone age, it was the date of the timetable that inspired trains of thoughts: November 1939.  As Europe went into a tailspin into a hellish darkness and Britain was left alone by May 1940, there was not much reassurance in the world, not much that continued undamaged by the shadow of the evil of National Socialism.

Standing in the shop, questions went through the mind: what had the owner of that copy of Bradshaw’s thought as he turned through its pages in the summer of 1940?  As everything else crumbled away, did the train service remain one of few constant things?  Did the ability to catch the 7.53 to work each morning remain one of the few bright and hopeful things amongst an avalanche of bad news?

Who bought their own copy of Bradshaw’s in those days?  What business was transacted through the journeys planned in those neat pencil figures?

A whole range of characters ran through the mind in the speculation on what the owner may have been like, but the most likely seemed a middle aged man, the younger men having gone away as part of the war effort.  A man, perhaps with a moustache and dark spectacles, sat at a table under the dim light of a gas lamp, perusing the tiny figures in the columns of the timetables.  What world did he imagine as he sat there, relying on dirty steam locomotives to give his world some order? 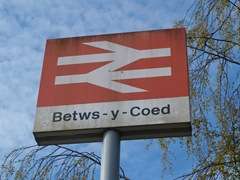 Standing on the platform at Betws y Coed station on Thursday,  the pondering of railway timetables became a matter for discussion.  There is a train that departs from Betws y Coed to make the 27 minute journey to Blaenau Fffestiniog at 0559 every morning from Monday to Saturday.  Who travels the line in this beautiful but remote corner of Wales at such a time of the morning?  In this age of rationalisation and market economics, to what workplace are people travelling through the darkness of winter mornings?  Perhaps the answers are more easily accessible than the identity of the man who wrote figures in his copy of Bradshaw’s, but the intrigue (and the romance!) of the railway timetable remains.