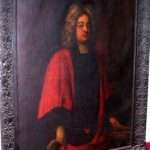 Dean Mosson is looking particularly glum this evening; he was to have travelled to Dublin tomorrow for restoration work, but was too big to fit into the car that called for him.

He hung for years on the deanery stairway wall with passers by assuming him to be Jonathan Swift. Only when the portrait was removed to protect it during renovation work did his true identity emerge; notes attached to the back of the canvas, which had not been seen  through the frame being screwed to the wall, identified him as Doctor Robert Mosson, Professor of Divinity at Trinity College Dublin and Dean of Saint Canice’s Cathedral, Kilkenny for 46 years.  He died on 3rd January 1747, some eight years before the building of the present deanery.

It is a pity he is not Swift, a onetime pupil of Kilkenny College, it would have been easier to have dug up information about him as he loiters on the floor of the front hall.  Compared to the various 19th Century prelates hanging around the dining room, Mosson is a figure of jollity and mirth.  They stare fixedly from dark canvasses, unmoving and unmoved by the world around; a world which they, and the Establishment they represented, ruled with rigour but little by the way of warmth and kindness. 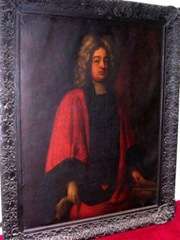 osson” and “Kilkenny” did not bring many promising results.  More than a century after Robert Mosson’s death, there was a Charles Mosson amongst the landowners of Kilkenny in 1876, no address is given and he is listed as having 75 acres of land.  Reading the 1876 list of landowners was illuminating.  The list was of those who had holdings of more than one acre; some had a few acres, some a few dozen acres, some a few hundred, then there were those whose holdings were altogether different:

Searching the Net for details of Co Laois, where I minister, reveals a similar picture.

What did struggling small farmers, and the mass of people who were even poorer, make of such gross inequities?  Asking Dean Mosson what Biblical defence he, a professor of divinity, would offer for a world in which one man has forty thousand acres when most have none brings no response.