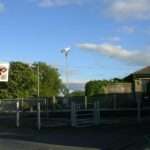 It is three years since I read Italo Calvino’s If on a winter’s night a traveller. For a traditional, conservative, who likes a book to have a beginning and a middle and an end, and to have a good story, it is a strange book.  Calvino sweeps through a series of plots and characters in a book that seems more a kaleidoscope than a novel, the picture changing with each turn of the page.  Yet the book had a strangely reassuring quality, something indefinable.

It has taken three years to put a finger on why a post-modern novel, a novel that reflects a world of change and flux, a novel marked by inconstancy, inconsistency, and a defiance of convention, should be reassuring.  It was nothing contained within the pages, it was the cover.  The cover had a silhouette of a steam train.  Trains were reassuring. 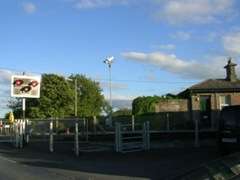 Why trains are reassuring is unclear.  Driving this evening to the village of Graiguenamanagh, there was a level crossing on the road to Gowran.  The crossing is at a now disused station, but the line is still in frequent use.  Approaching the gates, the red lights were flashing and barriers barred the road. There was a childlike delight in the fact that we were going to see a train, although its passage would last no more than a couple of seconds.  The sense of anticipation grew as the wait grew longer, and there was an urge to capture the moment, though what the driver of the car behind made of a middle aged man getting out of his cra to take photographs at a level crossing can only be imagined.

The wait seemed length, though was probably no more than thirty seconds.  There was a thundering noise as the train approached, the blare of its horn, and the sound of a rushing wind as it raced across the crossing.

Capturing a sequence of pictures on camera, there was annoyance that the locomotive did not appear in the pictures, the driver was driving the train from the cab at the far end.  But what was reassuring about a moment that lasted no more than two seconds?  Why is it that railways and trains have such a hold upon the imagination in a way that a road vehicle never has?  Is it about structures and timetables and orderliness, or is there something more?  Is the fascination of trains something more comprehensible in the discontinuous stories of Calvino, where a train would represent order and sanity? 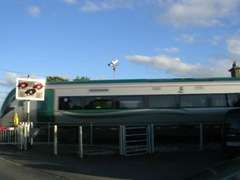