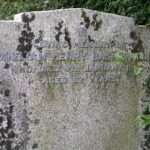 Switching on the car radio this evening, the lines sounded familiar – an RTE dramatisation of “The Hound of the Baskervilles” by Sir Arthur Conan Doyle.  The story was familiar from schooldays, when landmarks from the story were associated with the countryside around..

Our school was on Dartmoor, four miles from the village of Widecombe in the Moor. It was beautiful countryside and some of us on summer Sunday afternoons would walk along the narrow moorland road to Widecombe. There was never much entertainment for teenage boys when we reached the place; we would wander around the village and around the churchyard, looking at the gravestones.

It was somewhere deep within the churchyard that we found a headstone for a Baskerville family. We laughed at the find, Sir Arthur Conan Doyle’s Sherlock Holmes mystery set on Dartmoor, “The Hound of the Baskervilles” must have caused amusement, even if Conan Doyle got the name from elsewhere.

Leaving the churchyard, we met a group of tourists coming in. “Do you know where the Baskerville grave is?”

We pointed the way we had come. They headed off with enthusiasm, one commenting. “I wonder if that’s the Baskerville family from the story?” 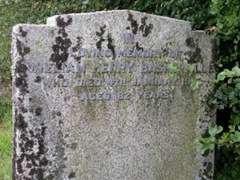 Facts and truth are important when you are fifteen and there was a temptation to go after them and point out that “the Baskerville family” they sought was not real, they were an invention of Conan Doyle.

Fearful that the conversation may itself have been imagined, last year I returned to Widecombe and walked to where I had remembered the headstone to be some thirty-odd years before –  it was reassuringly solid.

Did it matter whether the Baskervilles existed or not?  Where does truth end and fiction begin?

Many people in Ireland believe in the Saint Patrick of the legends. Try to tell them that Patrick never wore a cope and mitre and they will look at you as though you are odd. Many Roman Catholics believe that there is a unbroken line of Popes back to Saint Peter, despite the historical shakiness of any such claims and the numerous blips in medieval times. Many Ulster Protestants genuinely believe that William III was fighting on behalf of their own Protestant heritage; don’t try to tell them he was supported by the Pope!

We all have our own mythologies, our own stories about our identity. Problems arise when we use those mythologies as a weapon against others; the Pope using unhistorical claims as a basis for telling Protestants that we do not have churches and are not fully Christian; my own co-religionists believing that we have a special place in history, some even believing that Ulster Protestants are descended from a lost tribe of Israel.