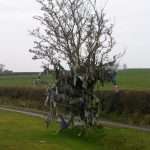 It was December 2009 when I first encountered a holy well at Old Leighlin in Co Carlow – there had been a prospect that I might have been rector of the parish – a prospect that quickly receded when they decided they were not having me – and I had gone to spy out the land. Beside the holy well, there was a heavy iron box fixed to the ground. Perhaps it had once been for offerings people might make; now it was covered with an odd assortment of items – memorial cards, funeral notices, prayer cards, a picture of Padre Pio, hand written requests, a child’s doll, the plastic cover from a Ventolin inhaler. It was like some religious version of Kim’s Game. Everything was soggy and the print had run on some of the cards.

To a hard-nosed old Protestant, there seemed a deep sadness about the eccentric collection; those leaving items could not have failed to notice the esoteric quality of the thing, was this some last throw of the dice? Was it a case of everything else had failed, so what was there to lose in going to the well?

A tree stood nearby, skeletal, gaunt in deep midwinter, its branches were tied with strips of cloth of varying ages and colours. Why would anyone want to tie coloured rags to a tree? What god or saint or spirit responded to such gestures? It seemed very alien to anything you would find in Anglican spirituality, there would be nothing in our traditions that would come remotely near anything you might find at the holy wells.

A few years ago, a friend made me a present of “Fish Stone Water: the Holy Wells of Ireland”; being honest, it had hardly been opened until today. It seemed as remote from anything I knew as would be a book on sailing or flying. Angela Bourke’s introduction to the book by Anna Rackard and Liam O’Callaghan, explains the customs found at the holy well; they seem at once more ancient and more modern than anything Christian. The rags on the tree are explained: 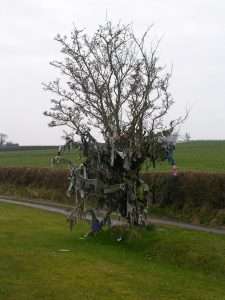 Ancient trees overhang many holy wells, and just as the water will not boil, their branches will not burn. Often the tree-most likely a whitethorn, a holly or an ash-will be decked with rags. In some places the rags used to be red, perhaps torn from flannel petticoats. Pilgrims would use a piece of cloth to wash the afflicted body part, then tie the cloth to the tree, leaving the illness behind. Nowadays, rags are any colour, and may include plastic bags and crisp packets, and among the tokens left behind are written pleas: brief notes about the troubles people suffer.

Today was Saint Ciaran’s Day and in the little parish of Seir Kieran, the place of the saint’s monastic community, we had a pilgrimage to his well and tree. Eamonn O’Gorman, our wonderful parish priest, drew on Scripture, pointing out the power and symbolism of water, and the symbolism of the tree as a symbol of God’s presence and of our inter-connectedness with Christ. There was a claiming of these strange sights and sites for orthodox Christianity; a sense of the sacred, of God’s presence in a little corner of Co Offaly on a grey March morning. 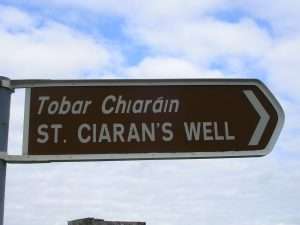